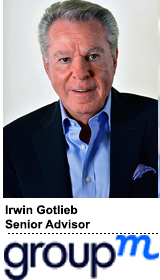 GroupM said Friday that global Chairman Irwin Gotlieb will step back from his role to become a senior adviser to the company.

Gotlieb was GroupM’s founding CEO in 2003 and ran the company until transitioning to Chairman in 2012. GroupM’s global CEO Kelly Clark will continue to lead WPP’s media-buying unit.

Gotlieb has made a three-year commitment to WPP in his new role but hasn’t revealed any specific projects he will work on as senior adviser. After 48 years in the business, Gotlieb said he has never taken two consecutive weeks off and wants to take a break to think about what he wants to do next, a GroupM spokesman told AdExchanger.

“I’m fortunate for the many opportunities this industry has afforded me, and I enter this new chapter with tremendous gratitude and optimism,” Gotlieb said in a statement. “I thank [WPP CEO] Sir Martin [Sorrell] for his support over the years, and I’m excited about the opportunity to contribute to WPP’s continued market leadership in an advisory role.”

Gotlieb began his advertising career in 1970 at ad agency Norman, Craig & Kummel. He worked at SSC&B and Benton & Bowles before accomplishing the first spinout of a standalone media agency in the US in 1993, as CEO of MediaVest.

Gotlieb joined WPP in 1999 as CEO of Mindshare Worldwide. He launched Mindshare North America by consolidating the media divisions of WPP creative agencies Ogilvy and J. Walter Thompson, before becoming the first CEO of GroupM in 2003.

“Irwin has always been the driving force behind the creation and development of first Mindshare, then GroupM and more recently WPP’s focus on developing our technology assets, first-party data and content,” Sorrell said in a written statement. “We will not miss him, however, as he will continue to be available to the Group as a trusted strategic advisor.”

Known for his love of gadgets and technology, demonstrated during his tours on the Consumer Electronics Show floor, Gotlieb has been instrumental in GroupM’s many ad tech and programmatic investments over the past decade.

During Gotlieb’s tenure, GroupM built its trading desk, Xaxis, which acquired display platform 24/7 Media in 2013. GroupM also invested $25 million in AppNexus in 2014 and $15 million in mobile creative management platform Celtra in 2017. Gotlieb also sits on the board of Invidi, in which GroupM invested in 2007.

But Gotlieb’s love for technology hasn’t stopped him from believing deeply in the importance of long-term brand building.

“I believe strongly in a marketing funnel, and that broad targeting will continue to remain an essential part of marketing,” he said in a previous interview with AdExchanger. “If I focus my effort on picking the lowest-hanging fruit and stop watering the tree, the tree would die. That’s what happens when brands overtarget.”

Gotlieb is the first media executive inducted into both the Advertising Hall of Fame and the Broadcasting & Cable Hall of Fame.