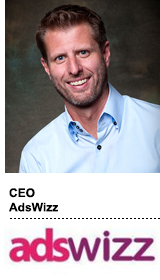 Programmatic audio has been in desperate need of scale.

Pandora hopes its March acquisition of digital audio platform AdsWizz will bring that scale to a growing marketplace.

Pandora’s inventory won’t be available programmatically until later this year (there’s no official date yet). When it does, AdsWizz will become the largest programmatic audio exchange on the market.

Pandora will give AdsWizz the resources to continue build and improve its product to meet needs on both the buy and sell sides.

And AdsWizz gives Pandora, which has lagged in developing programmatic technology, a full suite of products to not just to catch up with peers but grow the entire market.

“Programmatic audio has been too small and too fragmented,” said AdsWizz CEO Alexis van de Wyer. “We’re trying to make it easy to buy, on one platform where buyers can access all of the audio they’re interested in, in a similar format, with similar data. … We’re going to continue to invest in growing [our platform]. We don’t need to build, but we need to scale up.”

It’s a lofty goal for AdsWizz, which will have to reassure clients that it’s not favoring its new owner, who happens to be the largest seller of digital audio inventory in the market.

AdExchanger: How do your clients feel about your new owner?


ALEXIS VAN DE WYER: They’re actually excited. With one exception, which I can’t name, all of them are on board. It was surprising, because a lot of them have been competing with Pandora for a long time. They have some concerns around data confidentiality, insulation and protection.

Publishers feel it’s time to pitch the market on the value of audio and how the combination of reach, personalization and monetization is going to make it more powerful. It’s less a time to steal market share from each other. Most understand that Pandora’s [intention] to innovate fast, make audio easier to buy and invest in a platform is very positive for the industry.

How are you addressing their concerns about data?

From a technology and organizational point of view, we make sure there’s enough Chinese walls between the two technologies so no commercial data from our publishers is flowing through Pandora and vice versa. We’ve paid a lot of attention to that.

Pandora has said it wants to be the Google of programmatic audio. Are you afraid that might alienate buyers?

I think what Pandora meant is being a leader and investing in technology that will allow the market to grow.

Google gave a lot of value to advertisers. It reinvented the industry. It provided what the advertiser needed from a technology standpoint. That’s what Pandora wants to do: invest and raise the technology playing field to make the market efficient.

What do you plan to invest in first?

We’re investing in our current road map to make the platform more robust. Pandora has a lot of ideas that will be great for the market. [We’re helping them] build faster. There were needs we identified in the past that we didn’t have the bandwidth to [address], and Pandora is giving us the resources to move faster than competitors.

One example is holistic yield optimization. We’re optimizing all types of demand – direct, programmatic, programmatic guaranteed, PMPs – from not just a pure yield point of view, but around the user impact, the impact on listening and the long-term impact on performance.

When will Pandora’s inventory be available programmatically?

It’s in beta today, available to a limited number of clients. Pandora is testing and learning. It’s coming. Because of the scale, we’re taking it relatively slow.

Connecting their legacy system into the programmatic world took a little while. They’re making sure the commercial strategy and approach is correct and well positioned, and the yield optimization is good.

How will that shift the market?

I expect you’re going to have a lot of buyers that haven’t started buying programmatic yet do so. And you’ll see some budget from video and mobile flow into audio.

Audio is one of the biggest usages of mobile. Music services have almost as much scale as social media. And video has viewability and fraud issues. Audio is much safer. It’s a small number of publishers, there’s no fraud, it’s very personal and it has a large reach.

What’s the uptake of programmatic audio among buyers?

There are markets where the majority of audio is programmatic [or programmatic guaranteed]. The biggest markets are the UK, Germany and France. Some agencies are very advanced and excited about it. Others are more careful. The majority are interested. They want to automate and make things easier and they want more accountability and measurement.

How will you help Pandora further its ambitions in podcasting?

Host-read sponsorships are a very native and efficient way to monetize, but they’re limited in scale and timing. Everyone wants an ad for the two first weeks of a show, but a show that’s two years old, you’re not stitching an ad in there.

There’s a big opportunity to use the back catalog, but you need access to digital audio in a broader way. That’s when programmatic comes in. More and more host-reads are programmatically inserted. You need to be able to do that on the fly in an efficient way.

How is your programmatic podcast marketplace, PodWave, scaling?

It’s only starting. Supply is growing very quickly and the demand is lagging, but we’ve started to see in the last six months buyers who are more interested.