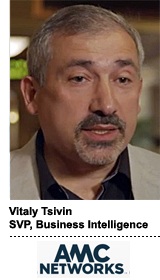 About three years ago, the paid TV channel AMC, known for shows like “The Walking Dead,” “Mad Men” and “Breaking Bad,” realized it needed a B2C strategy.

As AMC’s SVP of business intelligence, Tsivin built a data strategy from the ground up – one that crosses television shows and business units.

AdExchanger: You’ve done a lot since you got to AMC. Where did you start?

VITALY TSIVIN: There are certain prerequisites. One of them is a data management platform. You must have a team that knows how to handle large amounts of data. If you can’t do that, it’s like you don’t even know the alphabet.

As the company becomes more sophisticated and embraces the notion of data-driven decisions in their day-to-day business, we all grow into the next step, where we set more complex use cases.

Why build the DMP yourself?

We didn’t build it ourselves from scratch. We partner with IBM and use every aspect of their data platforms.

When I was with ABC [building the business intelligence department from scratch], my approach was best-of-breed. We brought in data appliances from IBM and Oracle and visualization tools from Oracle, master data management from Informatica and integration services from Microsoft.

I’ve analyzed every ingredient necessary for a DMP, from cloud to hybrid implementation. And I came to the realization that every big company has a slate of products that are in the same realm capabilitywise.

That led me to believe that by partnering with one company, I can take advantage of the relationships, support, pricing and compatibility.

And we pushed IBM’s product to the limits on many occasions. So its Cognos digitalization tools, for instance, has been modified, improved and enhanced to satisfy AMC needs.

How do you measure the effectiveness of your advertising on channels not owned by AMC? What if I watch “Breaking Bad” on Netflix?

At the same time, the industry is making advances with set-top box data. That’s second-by-second actual data that records when you’re at home, pushing buttons on your remote. It sounds like the panel should become obsolete very soon.

Not so fast. We don’t believe this will happen in the next 10 years because different providers are at different levels of technological advances. They’re not all looking to combine that data; it’s only at the household level and other issues.

So would we love to track every usage at the individual level of our content? Yes. Can we do it today? No. But we do everything we can.

Every TV now is into OTT services. So we’ve built our apps to extend digital consumption of our content beyond AMC.com. When it comes to Netflix content consumption, there are various streams of revenue that are very important to us and we’re trying to work it out into future deals, so we can get the granular data we need.

How do you allocate resources to develop and maintain all these different apps?

The television business is changing as we speak. Fortunately, there’s a lot of executive support and they know we need to react to it and be proactive. We’re doing everything we can to be on top of our game, from outsourcing to building those capabilities in-house, to making sure that every data-related contract goes into the right reviews – so data from television companies becomes an item on the balance sheet.

So when we work with MSOs and cable providers, who already are monetizing data quite a bit, we want to enter the partnership as equals.

Data transparency seems to be a growing concern – like knowing where data comes from and what exactly its value is. Does AMC think about this at all?

It absolutely is a concern. Every contract with a data item needs to be assessed. It’s fairly easy to assess customer value for a fully B2C business. We aren’t fully in a B2C business, so we need to do the valuations every time a contract comes up.

Let’s talk about the state of measurement. Are you optimistic or pessimistic that we’ll have a single currency within five years?

Everyone is trying to make advances in that space. Nielsen is trying to come up with their own Total Audience Measurement. Personally, I think for them to succeed, they’ll need to acquire set-top box data and link it all together.

I think cable providers have the shortest path as they own linear consumption and can track digital consumption since you’re using their broadband.

That seems to be the dream, but is that actually happening?

So we’ve got these measurement wars. But when all is said and done, would the single currency be owned by a single entity?

Nielsen is the most scientifically accurate representation of the world. Advertisers may or may not have full confidence in the Nielsen ratings. But compare it to a subset of data coming from a cable provider or from a TV manufacturer that isn’t even representative of the country.

What do you think about addressable TV?

There should be nothing better than that. You can go to a specific household and serve an ad. But it’s still only a $150 million business. Compare that to tens of billions spent on television. Part of it is technology. Part of it is that you only get household-based data. And advertisers, for years, are used to demographic advertising, which at least has gender.

So those challenges are why addressable television has not become the panacea.