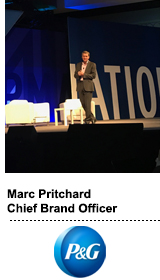 This time, he called for simplicity in the agency business, which has become increasingly fragmented as shops pop up to service every channel, platform and digital buying method in an increasingly digital and programmatic world.

“Whatever happened to the one-stop agency shop?” Pritchard asked executives. “Many rue the day that media agencies split from advertising agencies.”

Pritchard reassured agencies that they remain P&G’s “closest partners” and acknowledged that the past few years have been extremely tough on their businesses. He also made it clear that it’s time to step up.

“It’s time to turn the page,” he told attendees. “We can’t return to the glory days of the past, but we can take our game up to a new, higher level of performance.”

Despite $6 billion of investment globally, the advertising industry is facing slow growth because of too much complexity, “crap” and cost, he said.

“[That’s] a really bad combination for everyone,” Pritchard said. “For some, it raises the question of whether it’s worth investing in advertising at all.”

“It’s better, but still too complex,” he said. “Bottom line: We need you to get simpler.”

P&G is asking its agencies to work together across creative and media disciplines to create what looks like a good old one-stop shop. Skilled talent across all specialty disciplines is extremely valuable.

“It’s astonishing to me that we still have digital agencies,” he said. “Do we have print, radio or out-of-home agencies?”

To help agencies, clients must simplify their own organizations by breaking down silos, centralizing data and organizing themselves for digital and addressable communications, he said. P&G cut its brand-building organization by 50% and is continuing to consolidate silos to reduce costs and make business run more fluidly.

It’s time to fix the agency-client relationship, which has frayed due to fragmentation, complexity, fee reductions, reviews and diminished trust, Pritchard said.

“P&G views agencies as partners, not suppliers,” he said. “We lost too much of this shared mindset at P&G, and paid the price with mediocrity.”

Complexity not only leads to fraud, brand unsafety and other challenges, Pritchard said, but it also increases costs. Before consolidating its agency roster, P&G spent 50 cents or more of every ad dollar on agency fees and production.

When the Association of National Advertisers dropped a report detailing widespread agency nontransparency in June, marketers were rightly ticked off. But Pritchard shouldered some of the blame for encouraging, along with his fellow marketers, a broken compensation model.

“Having agencies that don’t make money is not a sustainable business practice,” Pritchard said. “We’re refining our compensation to make sure we’re paying for the work that you do and the talent that you bring to our brands.”

But agencies need to give a little, too. Pritchard called on his partners to nip the transparency issue in the bud by making their contracts fully transparent, refunding any and all rebates, outlining clear and thorough audit rights and providing insight into how they buy media as agent or principal.

Of course, agencies aren’t entirely to blame for complexity in modern advertising. Pritchard again slammed the digital advertising ecosystem for its “crappy media supply chain,” calling on both clients and agencies to cut out waste to bring down costs.

“There’s too much crap,” he said. “It’s creating more noise and generating the next problem.”

Innovating in areas like media, technology, data and programmatic is essential, but first agencies and clients have to clean up an often fraudulent digital supply chain, Pritchard said. As TV media inflation continues and digital costs rise, agencies and brands need more insight into what they’re buying.

“We want you to innovate, but right now, job one is leading media transparency,” he said. “We need to clean up – now.”

Pritchard called on agencies to adopt one MRC viewability standard rather than pushing their own version, ensure all publishers they buy from are TAG-certified for fraud, implement third-party MRC accreditation for viewability, reach and frequency – especially in walled gardens – and work harder at guaranteeing brand safety.

“We hold agencies and publishers equally responsible for placing our ads only where they belong and keeping them away from objectionable content,” he said.