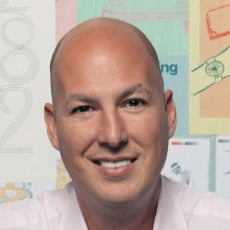 Amid this year’s great reordering of fortunes, Pinterest has been one of the lucky ones. The platform’s monthly users grew more than 40% in the second quarter, to 415 million. The expansion is led by new international users (50% growth rate) and Gen Z users, who are joining the platform at twice the rate of people older than 25.

“We saw different phases of user behavior,” he says. “When things first began in March and April, it was all about hunkering down in this new reality. It was cooking, kids’ activities, building out their home office and home fitness.”

Later, the platform became a repository for its users’ fantasies about the future. In May there were big increases in holiday gift pins, backyard weddings, summer road trips and home Halloween parties.

Naturally there’s a corresponding data opportunity associated with all that activity.

“The foundation of the data set is the combination of those 416 million people organizing 240 billion plus pins onto over 5 billion boards,” Kaplan says. “That is our corpus. That’s what we have to mine for people’s interest and their intent. That’s a really powerful signal because we can also look at what you’re likely to be interested in based on what other people who have saved that content or topic are interested in themselves.”