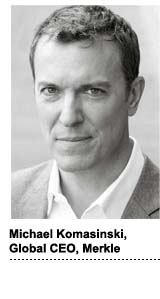 What can marketers do to separate the snake oil from the good stuff when it comes to identity resolution and cookieless technology?

Komasinski is new to the role – he took the reins in January after former CEO Craig Dempster retired – but he’s not new to Merkle, which he joined in 2015 from Razorfish as chief operating officer for agency services.

With third-party cookies going away and other identifiers, including device IDs, becoming harder to access, marketers need to “educate themselves by testing widely and often,” Komasinski says on this week’s episode of AdExchanger Talks.

Any identity or platform partners can claim a high match rate and be correct – but it’s important to know what is being matched and how that is being accomplished, he said. “A lack of specificity … really only invites more opacity in the ecosystem and in the marketing results.”

The online advertising ecosystem doesn’t need more opacity. So advertisers must set themselves up for success by demanding transparency from the start.

“An often-overlooked factor is to be really rigorous about the results before testing begins,” Komasinski says. “Clients should take the time to discuss the nuances of results measurement with their partners, especially when we’re head-to-head or there are multiple people head-to-head in a process – clients will be glad that they did that.”

Also in this episode: Komasinski growing up on a farm, Merkle’s stance on Unified ID 2.0 and an update on Merkury, Merkle’s homegrown identity resolution platform.