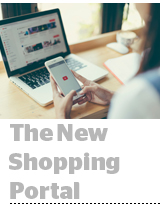 The new ad format creates a browsable feed of products within an ad, and will link from the YouTube video to the brand’s own product page. By contrast, Facebook’s recently-released “Shops” commerce toolkit creates on-platform storefronts but keeps the users and the transaction within Facebook.

Direct response advertising has taken on a new shine since the COVID-19 pandemic. Social platforms such as Twitter and Pinterest with relatively low DR activity suffered when ad demand plummeted, while Facebook, Instagram and Snapchat, which have many brands running ecommerce performance campaigns, told investors that DR ads helped buoy their revenue and CPMs.

But the storefront unit isn’t meant to rival commerce offerings from Facebook-Instagram or Snapchat. Its natural counterpart is actually television, Stewart said, and this announcement is part of YouTube’s NewFronts pitch to large TV advertisers.

“These ads are lumped into direct response, but aren’t only for brands that traditionally lean into DR campaigns,” Stewart said.

The apparel brand Aerie, for instance, piloted the YouTube product as part of a broad national branding campaign. As users engaged with the ad or showed signs of intent, for example, visiting the site, Aerie would add products with a personalized call to purchase.

Some pilot partners are even more unusual DR advertisers.

The auto brand Jeep tested the YouTube product too, and didn’t use it to connect with direct sales, which don’t happen on a site, but to generate leads by driving traffic to the company’s portal where visitors can design a virtual car to order.

Brands want to optimize toward different kinds of metrics, Stewart said, rather than the standard DR transactions, downloads or, in television, leads generated when people dial a 1-800 number.

Big CPG brands don’t fit into the old DR paradigm when people only purchased their items in stores. But groceries, home supplies and even products such as diapers now make sense as potential subscription purchases, Stewart said. If the brand thinks of subscription sign-ups or leads as a DR conversion metric, the campaigns will be much more effective at optimizing to those results, he said, just like how when clicks were the go-to metric, campaigns optimized toward clicks instead of actual results.