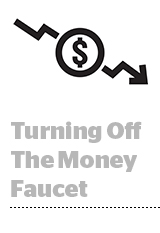 Drying Out The Well

Venture capital funding for ad tech and mar tech startups will decrease by 75% in 2019, from $7.2 billion to $1.8 billion, according to Forrester Research. As regulations like GDPR raise concerns over digital privacy, new startups will have a harder time raising funds. That difficulty could hinder innovation, but it’s not necessarily a bad thing for marketers overwhelmed by a kaleidoscope of “solutions,” said Carlton Doty, VP of emerging technology research at Forrester and author of the report. And, despite a lack of interest in ad tech, VC firms are enthusiastic about tangential areas like artificial intelligence, machine learning and connected TV. “The name of the game here is consolidation, rationalization and integration,” Doty said. The Wall Street Journal has more.

Roku’s rise since going public a year ago has fueled optimism among ad tech insiders eager for advanced TV budgets, and an ad-supported streaming success to counter Netflix, HBO and Amazon Prime. And Roku is still in the early days. “At this point, all we’ve done is bring tools and technologies that exist on other internet ad platforms over to TV. But I think there are also ways to make the ad experience better for customers,” Roku CEO Anthony Wood tells Ad Age. Better targeting would enable sequencing ad campaigns over time, Wood said. Roku also lets brands sponsor full shows. “In the Roku Channel you can have a family movie room brought to you by Geico or Duracell,” Wood said. “We have banner ads on our home screen, where we might offer a free movie sponsored by an advertiser.” More.

Social media platforms are shrinking in the United States, their largest market, notes Recode. Twitter and Snap have both lost users in the US for the past two quarters, while Facebook has been stagnant for the past three quarters. US users are generally more valuable than international users because they tend to bring in more revenue. Facebook, for example, generated $27.61 for every user in the US and Canada, compared to $8.82 for users in Europe and $2.67 from APAC users. Social media platforms can grow by scaling to emerging markets, but these markets generally don’t have established advertising industries. The other option is to risk annoying users by showing them more ads or expanding ads to platforms consumers aren’t used to seeing them in, like messaging. More.

Macy’s and Facebook are taking a new approach to capturing online shopping intent. This week, Facebook opened pop-up shops at nine Macy’s locations, featuring direct-to-consumer brands popular on its core platform and Instagram. “We are thrilled to be partnering with one of the world’s biggest retailers to bring some of those businesses to a physical store this holiday season,” Michelle Klein, Facebook’s senior marketing director for North America, told Retail Dive. Macy’s interest in these product sellers who can tell ‘stories’ is probably also tied to its acquisition of Story, a curatorial startup store Macy’s acquired earlier this year. More.