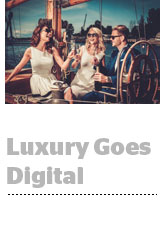 Oracle’s Moat acquisition wasn’t its only significant move on Tuesday. At its Oracle Data Summit, the company entered a partnership with Charter allowing brands to target connected TV audiences. An advertiser matches its data with Charter’s in-app, streaming and smart-TV viewers, and then Oracle can match that synced set with its own data, including data sets it has developed with partners like Visa for US cardholder transactions and Polk for in-market auto consumers. The move comes a week after Oracle debuted a data-driven linear TV partnership with Simulmedia. “Oracle’s been very aware of this demand in the market but you want to do something and do it well,” said Oracle head of TV solutions Daniel Harrison.

Luxury advertising is on the rise, according to a Zenith forecast. Thanks to an increase in spend in the US, China and Japan, ad investment from the auto, fragrance, fashion, beauty, and jewelry and watches sectors will grow 2.9% in 2017 and 3.9% in 2018. The growth is a major bounceback from 2016, when luxury advertising grew just half a percentage point. Luxury is traditionally a print stronghold, but all new dollars will go online, which will surpass print as the core driver of luxury ad spend growth by 2018. “Luxury advertisers are having to respond to consumers’ changing expectations,” said Vittorio Bonori, Zenith’s global brand president. More.

Fun While It Lasted

A story by The Outline’s Adrianne Jeffries examines the damage inflicted by Google’s “Snippets” on some websites that depend on search traffic. Example: CelebrityNetWorth.com, the longtime go-to source for Google searches about celebrity wealth. The company’s business dried up like a raisin when Google began providing the answers to queries directly on the search results page. Plenty of other quick-hit search sites, like CanIGiveMyDog.com, have also been usurped by Google Snippets. More.

Amazon’s $50 million deal securing streaming rights to 10 NFL games this year also included up to $30 million in free marketing and promotions for the league, Bloomberg reports. Sources declined to comment on what form that free marketing will take – other than to say the promo spots would run across Amazon’s consumer platforms. Even so, it’s a nice example of the distribution leverage enjoyed by major digital platforms in striking content deals. More.