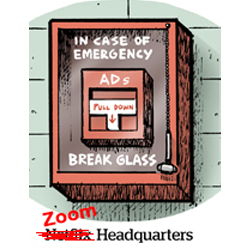 Turn The Other Cheap

Zoom CEO Eric Yuan shot down proposals to introduce ads in 2019 and again in 2020, when some executives floated a chance to capitalize on the influx of traffic and new users during the pandemic. One person who heard Yuan’s response says he called the idea of ads on Zoom “cheap and unprofessional,” The Information reports.

The pandemic made Zoom a household name. But it also blew up expense forecasts (you think your AWS bill is rough?) and awoke sleeping giants. Salesforce acquired Slack, and Microsoft cloned Zoom and made it cheaper within a family of products.

Zoom has a large pool of freebie users. So it’s intuitive to serve ads to that group, while preserving the subscription experience. Non-paying users also still accrue heavy bandwidth costs for Zoom, so there’s a legit reason to monetize somehow.

On the other hand, Zoom’s free tier is particularly popular with K-12 students. Add to that the standard blowback over ad privacy and user security – and advertising remains a runway, but one littered with landmines.

Shameless data gimmicks are everywhere. But that won’t stop anytime soon, because gimmicks are useful for collecting valuable first-party data.

AdExchanger covered this phenomenon a week ago after CPG brands ran cheesy Halloween sales gimmicks and fast-food chains dueled for celebrity online merch and app ordering deals – with first-party data grabs attached, of course. (FWIW, someone must cry out against unholy marketing projects like Tropicana-branded toothpaste or the on-the-nose name of Oreo’s customized cookie service, OreoiD, that requires users to set up accounts.)

But it’s already on to the next holiday for CPGs and QSRs. McDonald’s announced a partnership with Mariah Carey on a “Mariah Menu,” a twelve-day series of featured and free items only available on the app. And on Monday, Reese’s unveiled a three-and-a-half pound peanut butter cup the size of a pie for Thanksgiving, Adweek reports. It’s only available online, and Reese’s is only making 3,000 – they may cost more to ship than to make.

It seems silly, but adding a pool of 3,000 first-party, authenticated accounts to its identity data set is no joke. And since the customers are likely avid fans, the segment could be valuable as a seed group for prospecting or lookalike modeling.

Tripadvisor is looking for a successor to CEO Steve Kaufer, who’s leaving after a 22-year stint, Skift reports. What big questions face a new CEO in the travel search world?

Ideally, the next chief will prioritize Tripadvisor’s advertising business, which is pivotal for the next stage of the company.

Some big investors would also like to see meta-search consolidation via a merger with Trivago, for instance. (Priceline has been floated before.). Trivago is more of a down-funnel performance marketing booking engine compared with Tripadvisor’s travel planning and inspiration focus. TripAdvisor practically invented online hotel reviews.

The synergy would come if Tripadvisor could offload its ad business expenses to Trivago, while keeping a healthy cash flow and shuffling more travel bookers to the Trivago booking engine. That’s a tempting M&A thesis, but Tripadvisor executives believe their advertising business is undervalued by investors, according to Skift. Wall Street often doesn’t distinguish between its conversion-based services, Viator and TheFork, relative to its cost-per-click ad auction biz.

“It’s hard to out-search Google, and I think the successor is going to have a tough job,” said one travel industry vet.