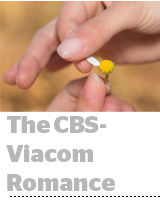 The CBS-Viacom merger is full speed ahead. Variety reports that there’s been significant headway in the negotiation process since last Friday, and the final details are being worked out. But there are still some serious wrinkles, the biggest being an agreement on the stock exchange ratio. Last year’s negotiations settled on an exchange ratio of 0.61 shares of CBS per share of Viacom. “The sale discussions this time are believed to be hovering at a price tag valuing Viacom in the neighborhood of $13 billion,” Variety’s Cynthia Littleton writes, “with the CBS side asserting that the merger premium has been baked into Viacom’s stock price in recent months amid market speculation that the companies would eventually come together.” More.

Don’t You SaaS Me

Wall Street loves the subscription tech business model. That predictable, easy-to-calculate revenue has helped tech stocks support high multiples on growth, because an ever-increasing subscription count is considered a strong indicator of baseline revenue. But Netflix is a different kind of subscription business, since it relies on producing new hit shows to generate sign-ups, The Information reports. It’s not easy when you’re susceptible to the whims of popular culture. And now Netflix is feeling the sting that can come when investors suddenly rethink a subscription business … and the multiples-based valuation crumples. Netflix’s market cap dropped by more than 15% after it reported its first US subscription quarterly loss since 2011. More.

Martin Sorrell’s S4 Capital has acquired influencer agency IMA for an undisclosed sum and will merge the company with its MediaMonks subsidiary. IMA has approximately 85 staff and claims to reach audiences via 40,000 influencers globally on behalf of clients such as Under Armour, Pernod Ricard and Microsoft, The Drum reports. Sorrell said in a statement, "This merger is yet another example of our focus on top-line growth. Influencer marketing is an important subset of the digital content marketing industry and is predicted to double in size over the next three years.” Read on.

For A Few Dollars More

China weakening the Yuan in reaction to Trump’s trade war will lower the cost of Chinese goods in America, while elevating the cost of American goods in China – and marketing budgets will follow. An assessment from GroupM’s global business intelligence unit predicts that Chinese marketers’ spend in the United States will increase, while American marketers’ spend in China will decrease. "The news is significant for the advertising industry as it represents one of the looming economic risks countering recent growth trends in countries around the world," GroupM’s biz intel global president Brian Wieser writes in a report on the implications of a US-China trade war on advertising. MediaPost has the 411.