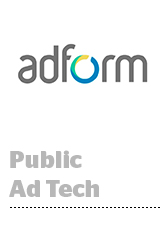 Danish ad tech company Adform filed for an IPO with the Copenhagen Nasdaq exchange on Monday. The company hopes to raise $115 million in its initial offering, Adweek reports. Adform’s year-to-date revenue through September totaled $53.5 million, a 16% increase from the same period last year. The company expects a $90 million run rate by the end of 2019. Adform operates both buy-side and sell-side ad tech, but the buy side represents 84% of its business. More.

Consumer brand giants like Pepsi, Reckitt Benckiser and Kellogg’s are recruiting Amazon advertising vets, suggesting that ‘shopper marketing’ budgets are increasingly up for grabs, Digiday reports. Shopper marketing is a catchall for money that CPGs and other brands pay directly to retailers for things like coupons, shelf placement and in-store displays. The key to shopper marketing is its direct connection to items coming off the shelf. Amazon has a huge advantage here as both a search engine and the retailer for half of all ecommerce sales. And Google stormed the category earlier this year with Shopping Actions, an ecommerce product feed that facilitates retailer integration. More.

WPP management has imposed a hiring freeze until early 2019 as the company seeks a path back to growth. The holding company, which was considering hiring 2,000 new employees, has been told to immediately stop recruitment in an effort to “try and protect” the business, according to an internal memo sent by group financial controller David Barker, obtained by Bloomberg. “We need to take urgent action to stop this now,” he wrote. WPP has been flagging for two years, a situation made worse by the tumultuous exit of longtime CEO Martin Sorrell, in addition to the loss of some flagship clients amid a string of media reviews and other factors. More.

Snap is partnering with comScore to provide third-party verification for views on Snapchat Discover. The numbers won’t be broken out by viewer, but will be available as part of a publisher’s aggregated audience totals, The Wall Street Journal reports. Buyers, who will get access to the Discover numbers in mid-November, are pleased that Snap is improving oversight of its metrics, but still want more specific breakdowns of how content is performing. “The key, however, will be whether or not the data, as it is being collected, is enough to validate that Snapchat is a stronger partner versus other options,” said Sarah Baehr, Horizon Media’s co-chief investment officer. More.

A Price On Their Head

The British Competition and Markets Authority, the UK antitrust watchdog, commissioned research for an inquiry into ecommerce dynamic pricing practices. “Personalized pricing involves customers spending different amounts when searching for the same products, tailored to the specific customer journey they have taken,” according to the UK government press release. The research will also explore whether and how certain customer data points influence personalized pricing, including home address, marital status, birthday and travel history. More.