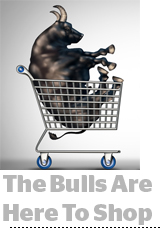 AB InBev, the beer and beverage conglomerate, is making a big play for data and digital assets. ZX Ventures, AB’s investment vehicle for new markets and technology, just bought the UK-based subscription beer service BeerBods, FoodBev Media reports. And that came days after ZX took over Babe Wine, describing the canned wine startup as “one of the most photographed wines on Instagram.” ZX focuses on businesses that have potential as data sources. Besides BeerBods, ZX has also invested in Pensa Systems, an in-store system of drones and software to track inventory for retailers with large warehouses (i.e. beer stores). ZX also went from minority investor to full owner of RateBeer, an app and site for beer reviews. More. AB is also pumping ecommerce and data investments within its core marketing team.

Bull In A Shop

Shopify IPOed at $28 per share in mid-2015 and was $120 by the end of last year. And it has rocketed since the start of 2019 to more than $320 now. KeyBanc raised its price target on Shopify shares to $350 on Monday, Bloomberg reports, and KeyBanc analyst Josh Beck predicts Shopify might rival Amazon in terms of its volume of first-party sales. More. Developer interest is also heating up for Shopify, even though Adobe’s ecommerce platform Magento traditionally attracted third-party apps, according to back-of-the-napkin metrics from data-based news site Thinknum. On Stack Exchange, a programmer Q+A forum, Shopify queries have grown hand over fist this year, but interest in Magento has plateaued. Shopify has also been on a major hiring spree, while Magento’s open job listings have dwindled to the teens.

Your Readers, Or Their Users?

Tech platforms aren’t just siphoning revenue away from publishers. They’re also breaking media companies’ user experience. If you consume content from a news reader on a social media platform, you do so within that platform’s browser. But if you click away to visit the content provider’s site you’ll have to sign in again. And the issue isn’t going away, since top app developers like Facebook, Twitter and LinkedIn consider time-spent a key metric, and so are loath to send users elsewhere. There are also privacy headaches if people can be tracked from app to app or app to web. “You should have your privacy. That same privacy also prevents us from seeing you’re logged in,” Ramin Beheshti, chief product and technology officer of Dow Jones, parent company of The Wall Street Journal, told Vox. “I think there’s a trade-off at the moment between privacy and amazing UI.” More.