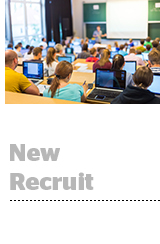 Universities are taking a play out of the data-driven marketing playbook to recruit students for graduate programs. Houston Baptist University worked with higher education consulting firm EAB to create a demographic and psychographic profile of its students and target lookalikes on Facebook to enroll in a grad school program. Other schools, like Kentucky Wesleyan College, are using old-school retargeting tactics to track prospective students around the web with banner ads that urge them to apply, The Wall Street Journal reports. “We understand that we are running a business,” said Tim Robison, VP for enrollment management at Lesley University. “In order for the university to be enrolled and financially viable, we need to take advantage of the tools that are available to do that.” More.

One year after being dished a landmark $2.8 billion fine from the EU for favoring its own shopping services in search results, Google is expected to face another record-breaking sanction this week for blocking rival developers by pre-installing Android smartphones with Google apps like the Play Store and Chrome browser. The European Commission will take as big of a bite as it can, but it won’t use regulatory action to force changes, Reuters reports. The EU could take a tougher stance but is unlikely to because the outcome would be unpopular. “Users in the EU are now completely accustomed to using Google services and have come to prefer them,” said global tech research analyst Richard Windsor. More.

Advertisers are rewriting their influencer marketing deals to ensure brand safety without losing the edgy appeal of internet-famous video makers. Most ad deals with YouTube and Instagram stars now include a “morality clause,” so brands can insist that content be taken down if it promotes a competitive product or crosses a line, The New York Times reports. Adam Wescott, a talent management exec, said one advertiser stipulated the amount of cleavage a fashion influencer could show and had posts unrelated to the campaign removed under a morality clause. And content creators want guarantees as well, such as the right to remove sponsored posts if brand execs are caught sexually harassing staff, committing other crimes or doing something that betrays their fans’ trust. “We just want to make sure it’s mutual,” Wescott said. More.

TVision Insights, which provides data about TV attention, grabbed some coin on Tuesday, raising $11.5 million in a round led by Accomplice and Jump Capital. It also hired Luke McGuinness as its first-ever president and chief operating officer. Company CEO Yan Liu said the funds will support expansion of its in-home panel and will help grow its team. TVision has a panel of people who let the company’s technology monitor what they’re looking at, so the company knows which people react to what they watch. Prior to this latest round, TVision had raised $9.9 million in seven rounds. More.