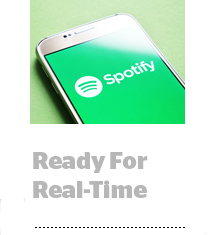 Spot Me Some Change

Spotify reported quarterly revenues of $2.9 billion, with about $375 million of that coming from its free, ad-supported tier. That’s a nice 75% year-over-year jump for Spotify’s advertising business. The company expects to clear $1 billion in ad revenue at the close of 2021, which will mark the first time it’s ever done so in a calendar year. CFO Paul Vogel called out the Spotify Audience Network as an important contributor to ad growth. The network launched in February as a way to extend audio campaigns on and off Spotify’s own platform. “​​I’m really excited about ads,” CEO Daniel Ek told Richard Greenfield of LightShed Partners about the potential future revenue mix for subscriptions and advertising. Ads are currently 13% of overall revenue. “I believe at the very least, this should be 20% of our revenues – but it might possibly be a lot more than that: 30%, 40% even over the next five to 10 years.” That would be a serious growth clip for the ad platform, considering Ek likely doesn’t expect Spotify’s subscription business to disintegrate. But it’s hardly crazy, or even over-optimistic. Under a similar timeline, Roku’s ad business went from a small team and test revenue stream to now being more than 80% of revenue.

A mere two days after Apple rolled out the iOS 15 to all devices, the company opened a beta test for iOS 15.2. The most important new feature in the beta – which is only available to iOS app developers – is the App Privacy Report, 9to5Mac reports. Apple alluded to the App Privacy Report at its Worldwide Developers Conference in June, and some developers expected it in the iOS 15 launch this month. The App Privacy Report will live in the Settings section for iPhones and other Apple devices and will show users how often every non-Apple app has accessed a device’s location, photos, camera, microphone and contacts during the past seven days. It also shows if and how often those apps contacted outside domains, such as pinging a website or a nearby mobile tracking beacon. On top of that, the privacy report will track internet and network usage, so users can identify apps that consume a lot of battery or mobile data.

Chinese manufacturers like Shein and AliExpress, not to mention Amazon-based brands, have flooded the market with crazy cheap clothes – dresses, shirts and the like for less than $10 or look-alike products at a fraction of the cost of brand-name apparel. But growing atop this mountain of cheap clothes are social-based boutiques, or “ghost stores,” that mark up the products and resell them with their own brand twist, according to a Vox report. Some may claim to be ethically sourced or have some other spin, but in reality all they’re doing is putting a higher price tag on cheap Shein products. It’s not illegal – Macy’s and Nike buy cut-rate Chinese products and mark them up even higher. But consumers get a sour taste when they see identical items sold more affordably by other outlets or with a Shein tag. Nike and Macy’s have their own labels on products, not a tag from another manufacturer. “The purchase starts to feel like a scam, even if it isn’t quite,” Vox writes. Relatedly, it’s only getting easier for Insta-sellers to monetize fast fashion, with the news from Instagram on Wednesday that all accounts can now share links (including to their fake store pages) in Stories posts.

Think piece: Sequoia is transforming itself from financial capital to production capital.  [Stratechery]

How Molson Coors is future-proofing its TV strategy. [Adweek]

Your browser can tell websites how to treat your data with global privacy control. [WaPo]

“There are suspicions”: Confessions on Google’s influence over programmatic media. [Digiday]