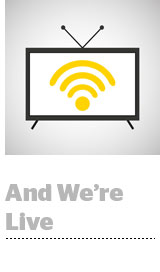 Hulu snuck in a hat tip to Netflix during its NewFronts presentation at Madison Square Garden on Wednesday. “We have more than than 47 million monthly users and 32 million are watching ad-supported content,” said Hulu’s SVP of ad sales, Peter Naylor. “We’re not like those other guys in the OTT space. We embrace advertising because it’s part of television’s foundation and we’re ensuring it’s part of television’s future.” Speaking of television, Hulu used its NewFront to formally debut its live TV service – complete with new programming deals from Scripps Interactive Networks and NBCU – and its new metrics. Hulu will provide complete validated measurement “across all viewers and devices” via Nielsen Digital Ad Ratings by this fall. More.

Antonio Garcia-Martinez, a former exec who led development of Facebook’s programmatic exchange, has been a nagging critic of the platform’s advertising strategy since his unceremonious departure in 2013 [check out his AdExchanger Q&A]. In the wake of the Facebook scandal in Australia, where leaked documents show the company tracking and segmenting the emotional state of teen and adult users, the former insider speculates on Facebook’s response that it never used the data for targeting. “Knowing the Facebook sales playbook, I cannot imagine the company would have concocted such a pitch about teenage emotions without the final hook: ‘and this is how you execute this on the Facebook ads platform.’” More at the Guardian.

Facebook is adding 3,000 people to its content safety division – and it needs the help. Although Facebook already has 4,500 live humans screening violent content, nary a day goes by without a heinous act of live-streamed violence taking place on the platform. With 7,500 people now on the case, Facebook hopes to be able to take faster and more decisive action to stem the flow of harmful content posted to Facebook. Will it be enough? According to Mark Zuckerberg, Facebook receives millions of requests to remove content every week. “If we’re going to build a safe community, we need to respond quickly,” Zuck wrote in a Facebook post on Wednesday. TechCrunch has more.

AppNexus poached a big client from Google’s DoubleClick. German publishing giant (and Business Insider owner) Axel Springer will “progressively adopt AppNexus’ enterprise technology products.” The press release [read it] notes that includes AppNexus’ ad server, Open AdStream, acquired three years ago from WPP [AdExchanger coverage]. The Drum reports that other pubs want off of the Google stack, and that Axel Springer in particular had been dissatisfied with Google since 2014, when the pub’s CEO Mathias Döpfner called the relationship “schizophrenic.” More.

The New York Times stock was up 12% at the close of trading yesterday after beating estimates and adding about 308,000 new digital subscribers [read the release]. The number of digital-only subscribers, now 2.2 million, is up more than 60% since this time last year, and combined with a 19% boost in digital ad revenues the Times cleared losses from its declining print business. The paper of record has been “aggressively trying to move the business from open programmatic, and the Lumascape with a thousand intermediaries,” said executive VP and CRO Meredith Kopit Levien in a response to one investor question about where the Times sees potential digital revenue growth. “We’re doing everything in our power to cut down the intermediaries and work with marketers as much as we can.”