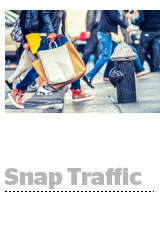 Snap is helping brick-and-mortar brands measure how well their Snapchat campaigns drive in-store traffic. The new “Snap to Store” metrics product ties foot traffic to media impressions within seven days of a store visit. A marketer can also compare those visits to Snapchat users who visited stores but didn’t engage with an ad. WSJ has more. Eventually, Snap plans to use similar location data to bucket users according to frequently visited places (i.e., department stores) and interests (i.e., travel enthusiasts). Related: Snap has doubled its headcount in the UK as it begins a push into international markets. Digiday.

In a column for Ad Age, GroupM Chief Digital Officer Rob Norman attempts to triangulate the real economic loss associated with invalid (i.e., fraudulent or nonviewable) impressions. He concludes Forrester’s 2016 estimate of $7.4 billion in waste is overstated since it applies to the estimated market value of the ads in question and not the real money paid for them. He believes the real damage is closer to $1 billion and concludes, “Recently the market in digital advertising inventory has been described in the most unflattering terms. Vigilance must continue but it’s time to move the focus of the debate away from nominal economic value and to the important issues of inventory quality, user attention, effectiveness, and the creation of business value.”

OK, Google, Is This Creepy?

As voice-activated devices enter the mainstream, advertisers debate how to insert themselves into consumer homes without feeling too intrusive. Burger King rolled out a TV spot that intentionally activates Google’s home device with the question, “OK, Google. What is the Whopper burger?” prompting the device to then read the Wikipedia description of its famous patty. Burger King did not partner with Google on the ad, demonstrating how brands can leverage home devices on their own accord to push products to consumers. “We saw it as a technology to essentially punch through that fourth wall,” said Burger King President José Cil. But given Wikipedia’s open editing policy, BK might take a punch too. More at BuzzFeed.

EU privacy laws set to go into effect next year will make it harder for advertisers to collect and target against user data. In a think piece for Wired, Klint Finley says that might be a good thing. He argues that more consumer data transparency could whittle down the ecosystem of ad tech companies that provide data but don’t necessarily perform for the marketer. “Ironically, despite the glut of data, advertisers may be no closer to knowing exactly how many people actually see their ads than they were before the rise of analytics.” He speculates that data privacy will force more curated deals between publishers and advertisers and a better experience for the consumer. Read it.