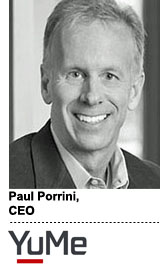 Another video DSP is off the market.

The deal – a combination of both cash and stock – is worth $185 million. Upon the sale’s expected closure in Q1 2018, RhythmOne’s CEO, Ted Hastings, will lead the combined company.

Yume began exploring “strategic alternatives” for its business in November.

The company has struggled to produce material programmatic revenue over the years, and its former CEO, Jayant Kadambi, abruptly left the company at the same time YuMe hired Deutsche Bank to kick-start its M&A process.

RhythmOne was once known as Blinkx, a video platform and ad network. The company acquired Burst Media in 2011 and earlier this year snapped up parts of the ad network RadiumOne.

The company claims one of its strengths is its direct sales force, which is tasked with securing more over-the-top business from large brands and agency holding companies as digital video dollars migrate.

“When we look at the combination of the two companies, we view our sales team as one of YuMe’s greatest assets,” said Frank Barbieri, head of corporate development for YuMe. “Supply is swiftly moving from commodity to being something differentiated through value-added features.”

But YuMe has seen an uptick in revenue from mobile, tablet and over-the-top devices, which together constitute about 64% of its total revenue.

The future is video served to these devices, overlaid with quality filters and improved audience targeting, according to RhythmOne CMO Dan Slivjanovski.

“When we think about the remaining independent inventory, there’s a lot of upside in guaranteeing KPIs like viewability or overlaying proprietary data and enhancing audience targeting,” he said.