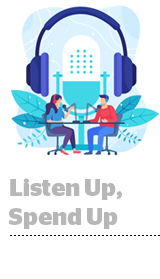 Podcast advertising is set to grow as much in the next two years as it did in the past decade. That’s according to new research prepared for the IAB by PwC diving into 2020 podcast ad revenue. During the fourth quarter of 2020, podcast advertising revenue reached $842 million, a 19% increase from $708 million the previous year. It’s an impressive spike, although there’s a long way to go before podcasts catch up to other streaming media, such as video and music. But the growth is expected to continue. Podcast ad revenue is set to exceed $1 billion this year and $2 billion in 2023. And here’s another factoid to whip out if you ever go to a cocktail party again: the use of dynamically inserted ads increased its share of revenue from 48% to 67% this year. The IAB hosted its seventh podcast upfront event this week, sandwiched between the NewFronts last week and the upfronts coming next.

Facebook has long warned of the negative effect that ad targeting-related headwinds – particularly platform changes – could have on its bottom line. So, has Apple’s launch of iOS 14.5 landed a blow? MediaPost reports on data from Facebook marketing partner StitcherAds, which found that, beginning on April 27 –  the day after iOS 14.5 was released – spending on Facebook continued to grow and increases have remained above the 90% mark both month over month and year over year. In other words, Facebook is still minting money and the cost per acquisition shows no signs of slowing down. Caveat: It’s still very early to draw big conclusions on the impact of ATT.

Le doublé standard, anyone? On Wednesday, Nicolas Rieul, managing director of Criteo in France and president of IAB France, tweeted two screen grabs side by side demonstrating Apple applying a far more favorable UX for its own consent prompt than the one required by its AppTrackingTransparency framework. The first screen grab displays a standard ATT prompt with the two binary options stacked atop of the other: “Ask App Not To Track” or “Allow.” The second screen grab shows what some might characterize as Apple employing a classic dark pattern. On the consent screen that stands between people and their ability to watch Apple TV is a big “Connect” button located at bottom center of the page … and all the way at the top right corner, nowhere near the other button, are the words “Don’t Allow.” The purpose of Apple’s consent screen is to notify people that the app will share what they watch with Apple and use it to personalize ads in Apple’s apps. As Rieul wryly points out on Twitter, Apple is defining third-party versus first-party based on its own needs. That distinction “does not exist in ePrivacy or in the CNIL guidelines,” he tweeted.

Google’s No. 2 man and its search boss Prabhakar Raghavan is a quiet executive in charge of 21,500 people. Here’s what it’s like to work with him. [Business Insider]

Facebook has provided only a few details about its mission to introduce a version of Instagram aimed at kids – and the company is under fresh scrutiny. [Digiday]

Cuebiq is partnering with the Ad Council to measure the latter’s COVID-19 vaccine education and awareness campaigns. [release]

Audience engagement provider CatapultX is launching a video monetization platform that relies on contextual AI technology to serve related to what’s happening in a given show. [release]

PMG introduced a new strategic planning and insights practice to bring data and analytics together with consumer and behavior insights. [Adweek]

Data company Alliant has brought on Brent Pero as its CRO. [release]