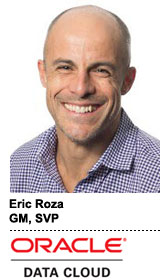 “We’ve really worked to have reach and meaningful scale through partnerships with Snapchat, Google and Pinterest and are rolling out some new things on the TV side, shortly,” said Eric Roza, the former CEO of Datalogix, now GM and SVP of the Oracle Data Cloud.

Last year, Oracle Data Cloud’s data segments enhanced more than $4 billion in media spend last year, he added. The next step for the unit? Helping clients get “relevant reach” – the right mix of reach and targeting.

“That’s something, candidly, a year and a half ago, we couldn’t do,” Roza said. At the time, Oracle Data Cloud was bringing together its acquisitions: BlueKai, Datalogix, AddThis and Crosswise.

AdExchanger caught up with Roza about the work Oracle Data Cloud has done since.

AdExchanger: So now that you’ve brought everything together, what has changed for Oracle Data Cloud?

ERIC ROZA: Over the last six months, we focused on acquiring more audience to double the scale of all of our audience segments. One way you do this is by fine-tuning your media integrations with all your partners – Facebook, YouTube and [all of our ad tech] partners. We’ve been honing those integrations for years and in almost all cases, applying way more data than most other people. We’d estimate we’re more than half of the third-party data market.

One of the perks of an acquisition like Salesforce’s Krux is access to all of that first-party, email and transactional sales data. What’s Oracle’s differentiator?

The vast majority of companies get the best results when they use the best of both [first- and third-party] data sets. The data cloud is an open platform, so if you want to minimize friction for marketers to be using data, that means [being] open. We might have some customers who are using Adobe, Krux, of course BlueKai, and then some of the more niche platforms like eXelate and Lotame. And we have many, many customers who aren’t using a DMP at all yet.

Where do you add the most value?

Building cross-device connections. Our ability to connect an identity and serve that same information across different browsers and devices, to more than double the scale but retaining the same level of quality you started with.

It became core for us, rather than just ancillary, to apply desktop cookie data more broadly across multiple devices where ad spend is concentrated. Our view is, we want a massive amount of signals to throw at problems and, clearly, a CPG wants purchasing data – but there’s a whole other host of signals.

What’s really interesting in the market right now is, “What’s the minimum viability for a view?” You have to be thoughtful about what the platform is. Is it an open, programmatic video buy? Or, you might see something like Hulu or YouTube where people watch for a fairly long duration and you don’t really worry about whether the ad play for two seconds.

Is it worth it?

We absolutely see a correlation between the length of a video view and a sales outcome. If you look at a context like Facebook or Twitter and you see a video ad, it’s much more native, you’re scrolling, but there’s a frame around it and the frame shows you what the product and the brand is.

If you only watch something for a second, it is intuitive and might feel more like a display ad than a video. If you put a frame around a video, you add some brand reinforcement that isn’t dependent on the video running, and it can really contribute to sales impact but certainly not than at longer durations.

How does Oracle Data Cloud play a role here solving the viewability/sales correlation?

We’re working with the open web, walled gardens and viewability vendors to measure the relationship between great viewability, audience and outcomes, and how you make these trade-offs. If I could give you an audience five times more likely to buy a car in the next six months, that media should probably be worth more than an audience that’s a random representation of the population.

People who are a little more old-school tend to just think about reach. And the real question is what’s the readiness of the market to say, “I’m willing to forgo this metric that’s always been used to judge my success for the last 30 years”?