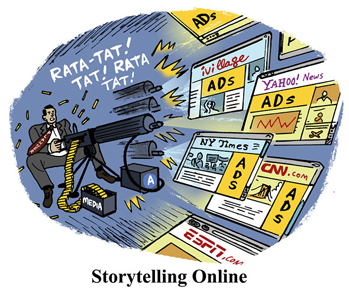 Thinking Outside The Xbox

Rather than interstitials that appear between breaks in mobile games, the Xbox network would help place a snazzier type of ad, like a digitally rendered billboard in a car racing game, for example.

Microsoft ads chief Rob Wilk recently told AdExchanger that Microsoft has found “religion” when it comes to advertising. “There’s a newfound commitment I’m feeling from [CEO] Satya [Nadella] all the way through to our senior leadership team that, hey, if we can build a $10 billion ad business, what else can we do to accelerate that?” he said.

Even so, being part of Microsoft means advertising is a small cog in a large machine. For the Xbox ad network, for instance, Microsoft reportedly wouldn’t take a cut of revenue, which would be split between the developer and the ad tech vendor that places the ad.

If that’s the case, Microsoft’s ad business would be losing out on easy money – but the ad network represents a bigger opportunity for Microsoft overall. Developers want a third operating system to challenge Apple and Google, and Microsoft wants to play that role. Challenge is, Microsoft doesn’t have immediate access to smartphone owners.

And if developers build it, perhaps players will come.

Russian opposition leader Alexei Navalny has called for Western supporters to open “the second front” in the Ukrainian war – the fight for information.

“We need ads. Lots of ads. A huge national anti-war campaign will start with an advertising campaign. 200 million impressions a day to reach every Russian internet user twice. Stories, posts and prerolls. Across Russia, in cities and villages. On every tablet and every phone,” he tweeted in a thread.

Why ads? Blunt restrictions on Russian media hit opposition outlets that counter state propaganda, and there is no potential organic distribution because of Russia’s authoritarian political system.

Police officers or even many private employees who like one of Navalny’s Facebook or YouTube posts could be fired. People who commented on Arnold Schwarzenegger’s viral anti-war video? Fired.

The only way for real information to pierce the state propaganda is … ads, Navalny says.

For the cost of one Javelin missile, Navalny says, “we would get 200 million ad views in different formats and provide at least 300,000 link clicks or at least 8 million views on a video with the truth about what is happening in Ukraine.”

Apple and Google are like the right and left hands of the mobile app market. They operate independently but seem at times to have a single brain.

Many of the core functions in the Android Privacy Sandbox, launched in February, ape Apple’s privacy changes, according to Digiday.

But they’re not total twinsies. A key difference between Google and Apple is the latter’s rigid control over its operating system, while Google has an open-source approach and often must slow-roll changes because of regulatory scrutiny.

For example, at a global privacy summit earlier this week, Apple CEO Tim Cook denounced the Open App Markets Act, which would force Apple to allow outside apps to “sideload” third-party code (aka allow users to download an app outside the App Store), which is possible on Android devices. Cook warned of the “unintended consequences” that would compromise the security of iPhone users if the bill becomes law.

Fair economic competition and data privacy are both loudly cited as fundamental human rights. But the question is: Can they coexist?

Peloton follows other manufacturers with a turnaround plan that lowers the price of hardware (its bikes) but increases subscription fees (sweet, sweaty, digital revenue). [WSJ]

Sinclair’s big upfront pitch is for advertisers to move 20% of cable budgets to free online-streaming networks to capture cord-cutters. [B&C]

Twitter pulls out all the stops to resist Musk’s “takeover” attempt. [The Verge]

Here’s how a developer made a mobile game called Rebuild Ukraine in the middle of a war zone. It monetizes with in-app ads and 100% of the net proceeds are being donated to Ukrainian charities. [VentureBeat]