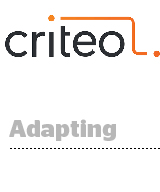 A Retarget On Your Back

Criteo shares fell on Friday after it was revealed the retargeting company had been removed from the Facebook marketing partner program, Bloomberg reported. The situation is not dire, since Criteo’s share of revenue from Facebook has dropped from 9% in 2016 to 4% in the past quarter, and it can still buy Facebook inventory, just without access to new product beta tests. Criteo didn’t breach Facebook policy, but its business is in conflict with Facebook’s renewed priority to keep tech companies from identifying or targeting its users around the web (except by working with Facebook, of course). “Facebook wants direct customer relationships and has been moving toward this in the retargeting space over the last few years. As part of this, Facebook has been making it more difficult for Criteo to acquire inventory for several years,” KeyBank research analyst Andy Hargreaves wrote in an investor note. More.

An early concept of Google’s podcasting app, called Shortwave, that was released on a former Google designer’s website Friday reveals the search giant’s vision for the medium. Shortwave aims to support podcast discovery by serving listeners in “tiny portions” throughout the day, 9to5Google reports. In the mockup, listeners can select whether they want to Laugh, Learn, or Listen and receive minute-long snippets of content to “fill their day with stories.” Google dismissed the design as an “exploratory concept” that doesn’t represent the current product, but it could one day become a feature of its larger podcast strategy and change the way consumers and brands think about podcast content. More.

Les Moonves stepped down from his CEO position at CBS Sunday evening. His settlement, in addition to a reported $100 million exit package, includes a two-year hiatus on merger talks with Viacom. Moonves, who was accused in a New Yorker article by six women of sexual assault banning decades, will be replaced by COO Joe Ianniello as interim CEO. Ianniello is credited with the network’s digital transformation since it split with Viacom in 2006. Autonomy from National Amusements would allow CBS to pursue a sale; shares were up 3% on the news. More.