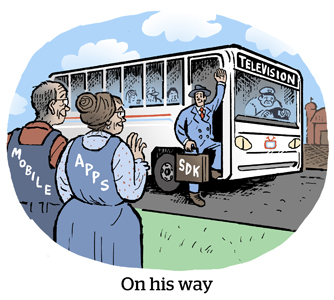 On Friday, Innovid reported its second quarterly earnings since the company went public in December and its first since closing its acquisition of TV measurement provider TVSquared earlier this year.

Innovid is only two years into its measurement journey, and the TVSquared deal is meant to give the company a leg up. TVSquared already brought in 9% of Innovid’s total Q1 revenue.

The acquisition was “transformative,” said Innovid CEO Zvika Netter, who told investors on Friday that the company’s “original emphasis on CTV has broadened to include linear TV and digital video.”

“The advertising opportunity in converged TV is enormous,” Netter said. “Expanding our measurement infrastructure will allow us to address the growing needs of the marketplace.”

Meanwhile, Innovid reported a quarterly loss of $7.4 million, and shares were roughly flat when the market opened (which isn’t bad considering how a lot of investors feel about tech and media right now).

TV broadcasters aren’t the only ones obsessed with test-and-learn right now.

Programmatic is in a vendor evaluation phase, as marketers and agencies sound the call for identity-related and first-party data solutions to help with post-cookie measurement.

It’s a trend that’s colliding with another macrodynamic: the Great Resignation.

Advertisers are struggling to hire programmatic experts. “There aren’t enough hours in the day [to vet ad tech firms],” one buyer tells Digiday. “Especially with new ad tech and data partners, that’s not something I can throw at an entry-level person. They’re not going to get to the crux of the questions that I need to have asked to even start to think of them as a partner I’m going to take to my clients.”

Finding senior execs who can decipher BS-laden pitches and suss out quality vendors is “the hardest thing right now,” says another.

On the flip side, there are a lot of now-former programmatic execs bouncing around who are more than willing to dish about their past employers.

“[Assessing vendors] is becoming a little easier because there’s so much shift of talent between different vendors,” says an anonymous advertiser. “When I ask them, like, ‘Hey, how does [this] rank up against XYZ vendor?’ they would actually tell me because they worked there.”

Let Me Speak To Your Manager

The biggest open web ad tech players are pushing for the adoption of “OwnerDomain” and “ManagerDomain” fields for Ads.txt.

The OwnerDomain and ManagerDomain tags indicate when a vendor or supply-chain path isn’t merely authorized to bid on inventory but is either the site owner or an assigned third party that represents the inventory.

The adoption challenge is twofold. First, publishers must update their Ads.txt files. That’s the easy part, though. The bottleneck is getting buyers to use the data.

“Advertisers, in particular, should question their DSP or buying platforms about how they use Ads.txt, sellers.json and SChain to minimize fraud and maximize their dollars being spent on high-quality apps, CTV channels and websites,” according to an IAB Tech Lab blog post penned by product leaders from Index Exchange, CafeMedia and The Trade Desk.

For context: CafeMedia and Index Exchange are SSPs with many exclusive or privileged publisher relationships. (CafeMedia is the “ManagerDomain” of the long tail, so to speak, and Index Exchange has an exclusive SSP deal with Target, for one, and a large footprint for its header bidding wrapper.)

The Trade Desk, meanwhile, is busy winnowing its supply-chain paths to get as clear of a line of sight as possible to inventory rather than working with networked intermediaries.

Blackstone will acquire genealogy provider Ancestry.com for $4.7 billion, putting a massive and sensitive data set into the hands of the largest PE firm. [Reuters]

Amazon’s IMDb launches a “What to Watch” app for Fire TV to simplify streaming entertainment. [release]

Epic Games partners with Microsoft to carry Fortnite on the Xbox Cloud Gaming platform. [The Verge]

Automakers have slashed their ad spending, causing pain for media companies that could continue well into 2023. [Insider]

With no third-party accredited measurement providers, this year’s upfront season is a testing bonanza. [Morning Brew]