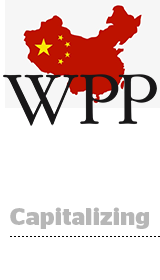 WPP In A China Shop

WPP is exploring selling 20% of WPP China, its agency subsidiary in the market, to the Chinese media triumvirate of Tencent, Alibaba and China Media Capital Holdings, reports Sky News. The discussions are in the early stages, but WPP is reportedly pushing a $2 billion to $2.5 billion valuation of its China operation. Interpublic, Omnicom and Publicis have all built agency businesses in China, but none have done so as comprehensively as WPP, according to Sky, and securing its position in the world’s fastest-growing market could pay off handsomely. “If completed, a deal would underline the rapid convergence of the marketing services and digital‎ technology sectors at a time when changes to both are being driven by rapid advances in areas such as data analytics.” More.

BuzzFeed unveiled a site redesign and new branding as BuzzFeed News last week. The changes reinforce the news company’s efforts to diversify away from direct-sold advertising, Digiday reports. The only ads on the redesigned site are a limited number of display units transacted on open exchanges, and there are future plans to sell homepage takeovers. Native ads drive a majority of revenue but don’t get prime positions, and BuzzFeed seems to be resetting its front-page tone to differentiate its reporting and feature writing from the lighthearted community content it’s been known for. The new look and moniker “give the brand a distinct, elevated look and feel to match its world-class reporting,” according to a spokesperson. “While the site only includes programmatic ads at launch, we’re excited to explore new partnerships as we continue to pursue numerous opportunities to unlock the enormous value of BuzzFeed News.” More.

Facebook has suspended apps by data analytics firm Crimson Hexagon, which serves clients including US government agencies and a Russian nonprofit with ties to the Kremlin. The company said it has 1 trillion public social media posts from Facebook, Twitter and Instagram, and its founder, Harvard researcher Gary King, is working on a project that accesses Facebook data to study the platform’s impact on elections around the world. According to The Wall Street Journal, Crimson Hexagon operates with little oversight once it pulls data from Facebook and its government contracts weren’t approved by the platform in advance. Facebook wasn’t even aware of some of the company’s government contracts. Crimson Hexagon said it only collects anonymized and publicly available data, but it had at least one incident in 2016 where it pulled private data from Instagram due to a software glitch. More.