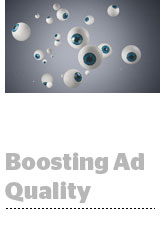 NBC News is rolling out two ad units developed in-house to better meet viewability standards. Mach is a custom display unit and Better is a unit that scrolls through images as the user moves down the page. Both surpass the IAB’s standard of one second in view. The idea is for NBC News to get people to engage on its site for longer periods through immersive ad units that give readers more information and leave more room for the main editorial content. “We were able to think about advertising at inception, rather than as an afterthought,” NBC VP of digital product Moritz Gimbel tells Digiday. “When we think of great user experience, it includes advertising.” More at Digiday.

As marketers consolidate their agency rosters, many are finding value in having partners work on-site. That’s what News UK, which publishes multiple newspapers, did with WPP. The holding company pulled 70 employees from across Chi & Partners, Wunderman and Mindshare to service the client on-site under a group called Pulse Creative. “An on-site agency is faster, more productive and we understand our clients better,” says Simon Martin, CEO of Oliver Group, which creates on-site agency teams for clients. “We typically save 30% against a traditional agency.” More at Ad Age.

Google raced to an early lead in AI research, and most think of US companies like Microsoft, Facebook and Amazon as filling out the top of the AI pyramid. “It’s easy to fall into the old stereotype – the copy-to-China stereotype, that China is so far behind and they’re just importing everything – but that’s out of date,” Adam Coates, the American researcher who runs Baidu’s AI lab, tells Wired. Tencent and Alibaba have also opened AI research labs and are now influential members of international working groups that define the young field. With Google and Silicon Valley tech boxed out of much of the Chinese cloud and internet economy, the machine learning going on behind “the Great Wall” could rival or surpass what happens behind any particular garden’s wall. More at Wired.

Careful What You Optimize For

Facebook’s news feed has long hinged on the assumption that engagement = consumer satisfaction. It’s a logical conclusion: Someone who likes, comments or shares one post will want to see more like it in the future. But “Facebook’s focus on optimizing for engagement is, in and of itself, harmful to its users,” argues Jon Evans at TechCrunch. What people will reliably pause to watch isn’t necessarily what they want to see over and over again (like car crashes along a road – or the shocking and violent news stories that end up swamping user timelines). More.