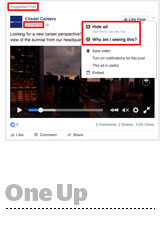 Back On The Block

A group of computer science academics released a browser extension last week that blocks ads on Facebook and overrides publishers that deflect ad blockers. Facebook obscures its HTML code from ad blockers, but to show users the difference between an ad and an organic post, the new “perceptual ad blocker” identifies promoted content by scanning for non-HTML signs of an ad (like certain words or differences in size and shading that indicate a sponsored post). Facebook can whack-a-mole the product, but it would disrupt user experience by constantly changing the shape and look of ads. “Due to the architecture of web browsers, there’s an inherent asymmetry that favors users and ad blockers,” writes Arvind Narayanan, a Princeton University researcher involved in the release. Check out the paper.

Publishers struggle to aggregate reporting across their ad tech vendors. “If I wanted to know what I made yesterday, the number of reports you need to aggregate and look at is fairly overwhelming,” said Matt Minoff, SVP and chief digital officer for Meredith Corp. Now there’s ad tech for that, too. To understand the collective value of its vendors, Meredith works with Staq, which pulls together all of its ad performance data in one clean interface. Staq’s ability to aggregate data from more than 400 vendor sources and offer transparency into publisher spend makes it like the sell side’s version of a marketing cloud, writes Mike Shields for The Wall Street Journal. More.

Amazon released an invitation-only developer kit that will make it “easier than ever” to integrate its Alexa virtual assistant into internet of things (IoT) devices, said Priya Abani, director of Amazon Alexa. Devs will be able to access to Alexa’s voice processing technology, or what amounts to its “ears,” according to GeekWire, as well as Amazon’s software for word recognition, noise reduction and echo cancellation for hardware devices. More. Related: As virtual assistants become ubiquitous, platforms must think about best practices for advertising through IoT devices. More.

About.com plans to augment its media revenues with commerce as it builds up a chest of vertical-specific sites, Max Willens reports for Digiday. About keeps it clear for readers what’s content and what’s commercial by creating separate “buy” sections with different content templates and only selling products on which the pub can offer a competitive opinion. CEO Neil Vogel is betting that evergreen content from an editorial source will create trust and, ultimately, conversions. “Commerce converts better in a vertical strategy,” he said. More.