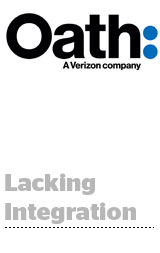 Verizon Oath, consisting of its merged AOL–Yahoo group, may be a formidable contender to the Facebook–Google duopoly. But for now Oath is a messy cocktail of nonintegrated and overlapping ad tech acquisitions within the two legacy companies, reports Yuyu Chen at Digiday. Both AOL and Verizon are still digesting some of their own acquisitions from glory days as indie ad tech players, and fusing those stacks will take some time. “BrightRoll, Adapt.tv, Millennial Media, Nexage and Flurry all remain like separate products – none of them is integrated,” said an anonymous vendor. “Verizon cannot just mash them together.” And that’s just the tech integration piece. Verizon also has to bring together two established legacy cultures and leadership teams. Read it.

Is Oracle’s new pair-up with Simulmedia an opening salvo in the television space? “The goal is to allow advertisers to use our data to improve the effectiveness of their TV campaigns,” Oracle VP Joe Kyriakoza tells Broadcasting & Cable. He calls television’s $70-billion ad market “a big bucket of money that can benefit from being a lot smarter.” The deal is Simulmedia’s second marketing cloud partnership, after an Axciom LiveRamp tie-up last month. More.

With 200 million daily active users on Stories, Instagram’s game of Snapchat copycat is paying off. Snapchat now trails Instagram in the “Stories” category it invented. And Instagram isn’t slowing down. The social platform yesterday announced Selfie Stickers and Pinning, both previous Snapchat innovations. The only feature left for Instagram to rip off is Snapchat’s animated augmented-reality filters, although Facebook and Messenger already have a similar functionality in their apps. Snapchat’s new-user growth rate has sunk 82% since Instagram stories launched last year, TechCrunch reports.

Omnicom filed an SEC proxy statement on Thursday, expressing a commitment to align CEO compensation with agency performance. Ninety-six percent of CEO John Wren’s compensation in 2016, for example, was variable based on the performance of the network. “The more senior the executive, the lower his base pay will be … and the higher his incentive-based and long-term retention components will be, as a proportion of his entire compensation package,” the note reads. “We believe this is aligned with shareholder interest and the long-term interests of the Company.” More at Seeking Alpha.

Fun To Think About

RBC’s media analysts write that “investors have increased their expectations that Apple could seriously consider acquiring Disney.” It would be an absolute monster deal, potentially consuming Apple’s $240-billion pile of cash on hand. Apple consumer technology could integrate with theme parks, and its mobile distribution could magnify ESPN’s streaming deals. Regulatory hurdles are lower now too. But it’s still a “bet-the-company move,” writes Variety.