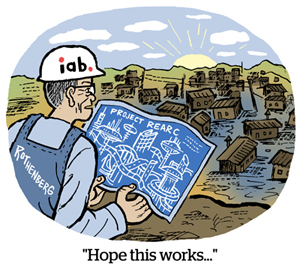 Do Publishers Run The IAB Again?

Publishers are “in a privileged position” in the new world of privacy-first advertising, Benjamin Dick, the IAB Tech Lab’s senior director of product, said at an event hosted by the group last week, covered by Marketing Brew.

Without third-party cookies or audiences, publisher data is the premier asset on the open web.

Publishers “should be in a position to make a determination as to who those audiences are,” Dick said. (Context: He’s throwing a little shade at Google privacy products like FLEDGE and Topics, that allow Chrome – not the publisher – to determine contextual data.)

Another big topic (no pun intended) was “trusted servers.” Robin Berjon, VP of data governance at The New York Times, and Grant Nelson, a privacy product manager at TripleLift, both advocated the idea.

Still, “if it were just good enough to use siloed publisher data we wouldn’t need Topics or FLEDGE at all,” said Michael Kleber, a Google software engineer and mathematician, speaking at the same event.

Kleber said he’d love to call it a day and put online ads in the care of first-party publisher products and yet … “The best data we have says there’s still substantial revenue that we would like to be able to close,” he said. “But the measurement is a mess.”

Peacock Peeks Down The Funnel

All eyes are on TV measurement and attribution companies.

“Peacock Ad Manager is a self-service way to activate addressable media buys across our Peacock AX inventory pool,” Bhatia says. “Buyers will be able to specify their budget, choose their target audience, select their KPIs and measure both campaign delivery and performance.”

Strategically, the plan is to entice more performance advertisers to buy across NBCU’s own channels.

If all goes as planned, Bhatia expects that Peacock Ad Manager will expand NBCU’s market access from its 2,200-plus direct clients and tens of thousands of programmatic marketers “to potentially millions of search and social advertisers.”

But only time will tell how optimistic this projection is based on the level of marketer demand for outcome-based buying.

Glad To Hear It

A report published by a group of university researchers alleges that Amazon uses voice data collected by Echo devices to target ads, in violation of the company’s privacy policies, The Verge reports.

“[There is] strong evidence that smart-speaker interactions are used for the purpose of targeting ads, and that this ad targeting implies significant data sharing across multiple parties,” according to the researchers.

Sounds bad, but it’s not exactly a state secret. Amazon has a partner program with more than 40 vendors that collect voice data to “infer user interests.” Those interests can then affect which ads Amazon serves on its platform or via its DSP.

This is not a scaled data source for online advertising. How many people are actually using voice-data-inferred interests? But the researchers say the data can improve ad bids by as much as 30x.

Amazon says this is no different than what’s being done by services like Spotify that target ads by music choices, or by services that log whether someone uses an in-speaker assistant to make a booking or a purchase.

Internal discussions within the IAB Tech Lab aim to establish an accountability framework to help members better coordinate their policies across the globe. [Digiday]

“If you want a fascinating look into the internal workings of Google, look no further than this GitHub issue discussing changes to the FLEDGE proposal.” (h/t @Paul_Bannister)

Fox Corp.’s free, ad-supported streaming service Tubi is working on an expansion of its current arrangement with Nielsen that will enlarge the scope of where its viewership is measured. [Deadline]

Apple’s already gearing up for Q2 losses based on supply chain shortages. [Axios]

A business history of Quartz: The 10-year-old news site that tried everything. [NY Mag]