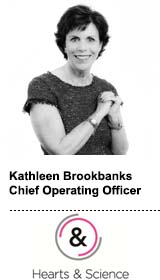 Within a year of its launch, Omnicom Media Group’s (OMG) third agency, Hearts & Science, was running two of the world’s largest media accounts.

This feat is made more impressive in that when OMG pitched for one of those accounts, Procter & Gamble, Hearts & Science didn’t even exist.

Hearts & Science now employs 800 people in nine offices across the United States, with an eye toward global expansion. To win new business, it will focus on putting data and addressability at the core of its strategies in an increasingly programmatic world.

AdExchanger: Is Hearts & Science’s focus on data a differentiator within OMG, or a model for other OMG agencies?

KATHLEEN BROOKBANKS: Everyone is trying to move in that direction. I don’t know if that means it’s wise for every agency to have data be its core premise.

People need differentiation. OMD and PHD’s [OMG’s other two agencies] foundations still have as much relevancy as they ever did and that will stay their core. It doesn’t mean they won’t use more data to support those premises.

How do you help clients make their data more actionable for media?

If clients let us pull siloed [first-party] data into our pipes, we merge it not only together, but with our data. We buy everything and anything we can. But if we can get our clients’ data, that’s even better.

What’s your programmatic offer? How often do you buy in-house versus through Accuen, OMG’s programmatic specialist unit?

We buy through and are supported by Accuen. There has never been a plan for any of the individual agencies to have programmatic buying platforms.

That’s different than other holding companies. Why do you maintain that strategy?

We don’t do any acquisitions of data or technology so we can change [partners] as they change. We didn’t buy something that we’re stuck with for a five-year contract if it’s not working.

If you’re doing all programmatic through one data management platform, on the back end you have rich data to do behavioral targeting.

How much of Hearts & Science’s staff came from OMG? How much new talent did you hire?

For P&G, it was about half internal [employees] and half new. About 75 came from Annalect. When you think about the fact that they don’t do media, that was a huge amount. Our structure looks quite different than other agencies.

In any group we’ll have as many [analytics] people as media people, from top-level strategy all the way through. Another agency might have two on an account. We probably have 40.

[At most agencies] investment people sit centrally on a huge client. We’ve embedded investment people into [our] planning teams. A TV negotiator sits with the strategy group and goes to every strategy meeting so he or she knows the business inside and out.

P&G works with a lot of different agencies. Is it difficult to collaborate across holding companies?

P&G is heavy on WPP and Publicis on the creative side. They were looking for more collaboration with creative agencies, so we do a lot of work with them.

There’s no reason it can’t happen more. I don’t think we have to go back to the old model of creative and media together inside one company for it to work. Clients encourage it, expect it and are willing to work in a way that lets us come to the table together. But if they’re highly siloed, it can be difficult.

Edited for clarity and length.