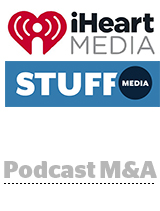 IHeartMedia has acquired podcast network Stuff Media, home to popular shows like “HowStuffWorks” and “Atlanta Monster,” for a reported $55 million. It’s one of the largest deals in podcast history. With one of the biggest audiences in podcasting, Stuff Media puts iHeartMedia, which has been ramping up its podcast footprint, in a good position to steal share of the growing market, The Wall Street Journal reports. In addition, iHeartMedia can use its its 850 broadcast radio stations as a marketing vehicle to attract new listeners to the medium. While the podcast market is still small – the IAB projects revenue will hit $659 million by 2020 – it’s a big strategic bet for iHeartMedia, which wants to capture radio listening as it shifts to digital formats. “Podcast is to talk what streaming is to music,” iHeartMedia CEO Bob Pittman said. “It’s very critical to us and very strategic.” Let the podcast land grab commence. More.

Amazon is trying to partner with major broadcasters and TV networks to sell ads for their content, Business Insider reports. “That would be a marked change for the TV business, where they do not traditionally allow third parties to sell their valuable ad inventory.” Digital media and tech companies see the glitzy upfronts and expensive TV deal-making between a few top ad sales executives and 200 or so national brands as an institution ripe for disruption. But TV networks continue to command high prices using the old model, despite receding subscriber numbers. More (with subscription).

Meredith continues to restructure its organization in search of savings. Roughly 200 employees were laid off Thursday as the company merged two magazines, EatingWell and Cooking Light, with similar audiences, Adweek reports. The first issue of the new magazine will debut in early 2019 and publish 10 times per year, but the titles will maintain separate digital properties. Meredith will also outsource its hardcover book retail and newsstand businesses and consolidate its Local Media Group’s digital ad business with its in-house agency, MNI Targeted Media. More.