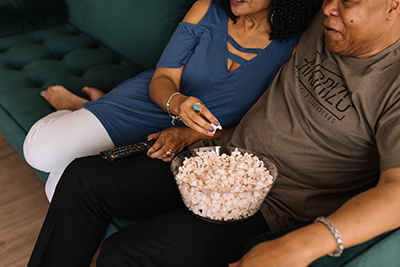 Much has been made about the shift to streaming over the past year, particularly with the launch of Disney Plus, WarnerMedia’s HBO Max, NBCU’s Peacock and a slew of other services.

But while streaming may be getting all the buzz, advertisers and agencies have also been leaning into addressable TV – the ability to deliver different ads to different households watching the same program – as marketers adjust their strategies during the COVID-19 pandemic. According to eMarketer, addressable TV advertising spend is expected to increase 75% to $3.6 billion by 2022.

Addressable allows advertisers to shift from targeting programs to targeting audiences instead, with targeted ads dynamically inserted at the household level through cable, satellite and IP TV delivery systems and set-top boxes.

If two households are watching a Knicks game on TNT, for example, one may see an AT&T ad for a new 5G smartphone, while another with young children may see an ad for “Tom & Jerry” on HBO Max.

“Over the past two and a half years the scale of addressable has grown considerably,” said Nicolle Pangis, CEO of Ampersand, a data-driven TV advertising sales and technology company that accounts for more than 60% – or 42 million ­– of all US addressable households. “There’s a shift because when there’s an ability to target an audience in a more specific way, advertisers and agencies are interested in that. We think of it as a way to augment television buying.”

How addressable has changed

Matt Kramer, managing director of advanced TV at Omnicom Media Group, said that there has been demand for both linear addressable and addressable OTT after the pandemic impacted budgets across media channels last year.

“The idea here is to move beyond broad demography to go to more exact audiences,” he said.

While cable networks have been addressable for years, fragmentation in OTT has further driven demand for addressability, with the auto industry as well as pharma, finance, CPG and DTC brands leaning in.

And despite being more expensive than traditional linear TV, addressable advertising is considered more efficient due to the household level reach and frequency control.

“Advertisers want to reach a consistent audience wherever they are,” said Matt Van Houten, SVP of business and product development at WarnerMedia.

There has been a huge change in buyer behavior over the past few years. In the past, Van Houten said, one agency buyer had addressable included in their TV buys.

Now, programmatic buyers have entered the fray, while more traditional buyers that normally buy demos or GRPs are using addressable technology to expand their reach or better manage their frequency.

“Many marketers that were historically traditional television marketers found themselves last year saying … I need to be a better CTV advertiser,” he said.

Addressability in linear vs digital

Chalozin and others said that the level of granularity in addressable TV can vary.

Digital addressable, he said, allows advertisers to use data in real-time to serve TV ads. For example, a pharmaceutical company could buy a spot programmatically based on the pollen at a user’s location, and feature messaging that pointed to the pollen count being high within the commercial itself, he said.

“A QSR could understand what time of day their ad was being served and direct the ad server to highlight different food offers based on the weather conditions at that time of day,” he said. “Think Starbucks in the late afternoon – it’s cold? Mocha pick-me-up. Hot? Frappuccino Happy Hour.”

Kramer said that while data-driven linear addressable allows advertisers to deliver against an advanced audience, it has the least opportunity to optimize.

“At the end of the day you’re still buying a unit that’s going to air across that entire scheduled program and organically you’re still going to have out-of-target delivery even though you optimized,” he said.

Van Houten said that with linear addressable, there’s no real way to understand who is actually watching a TV screen at any point in time.

“We just know that screen is turned on,” he said. “Because of that, if you’re selling a TV and digital campaign, you’re typically going to roll that up at the household level and you’re going to want to make sure you have unduplicated reach. Then you can really start to do some significant analytics around what outcome did that household take off of that media.”

Van Houten said more marketers are playing in the VOD space first as they wait for distributors to unlock more advanced tools and technologies for linear addressable.

“And then they’re going to go very heavy into linear,” he said.  “I think 2021 will largely be a build year in addressable for programmers, for CTV and streaming players and the smart TV manufacturers, who are going to lean in and do a bunch of technology integrations and audience testing campaigns.”

Last year, Ampersand teamed with Verizon Media to give marketers a simple and consistent way to buy linear and addressable TV audiences through Ampersand’s AND Platform, an integration that significantly drove scale that had been lacking.

Pangis and others said that addressability is a tactic to extend linear reach because for all the talk about cord cutting, linear TV is still where the majority of ad spending is.

But she added it’s important to be able to target audiences across all television formats, both linear and addressable, including streaming.

“You really need single platforms to stitch together all of the buys for a brand in order to create consistency in audience targeting and consistency in measurement,” she said.

Kramer added that broad demography is not always a negative for brands.

“The reality is that being too targeted can be just as dangerous as being too broad,” he said. “One leads to reaching too many people, while the other means you don’t reach enough people to support your brand. For most brands, when you’re running an addressable campaign, it should usually be used as a hyper-local … on top of your national campaign.”