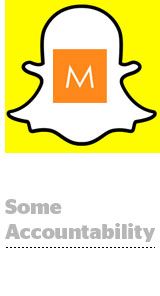 Snapchat has tapped Moat to provide advertisers with a viewability score for Snap ads, the vertical video units that run between Stories and on the Discover news service. While Snap has not said it will submit to an MRC audit, Moat is audited, so there’s a half-measure of accountability here. More at Adweek. Related: In an interview on Cheddar, Sir Martin said WPP had committed to spend spend $200 million on Snapchat in 2017.

US agencies saw 4.4% revenue growth last year, the slowest rate since 2013, according to the Ad Age Datacenter. Almost 47% of agency revenues came from digital spending, but growth there is slowing as well, from 13.5% in 2015 to 8% last year. And management consultancies pose a threat. The report points to Accenture Interactive, PwC Digital Services, IBM iX and Deloitte Digital as four of the biggest agency companies, with combined revenue over $13 billion. Despite challenges, agency stocks are trading high. Read it.

The UK government’s Home Affairs Committee issued a scathing report Monday saying social companies remain “shamefully far” from adequately policing their platforms for illegal and violent content. The enforcement suggestions include more stringent fines and transparency from media platforms about employees, complaints and action taken to address illegal content. Any action around the issue, though, is on hold until after the general election next month. “It is hoped that the successor committee in the next Parliament will return to this highly significant topic and will draw on the wide-ranging and valuable evidence gathered in this inquiry to inform broader recommendations across the spectrum of challenges which tackling hate crime presents.” Read the Parliament summary.

A 23-page internal Facebook document leaked to The Australian, the country’s biggest newspaper, outlines potential ways to target users as young as 14 at emotionally vulnerable moments. The social platform can track in real time emotional states including: “worthless”, “insecure,” “stressed,” “defeated,” “overwhelmed,” “anxious,” “nervous,” “stupid,” “silly,” “useless” and a “failure,” the paper reports. Facebook issued a statement calling the article misleading because it’s based on research that is never used to target ads. Facebook refused to disclose if the practices exist elsewhere and acknowledged that this research – even if it was never used to target ads – failed to go through the proper review process. More.