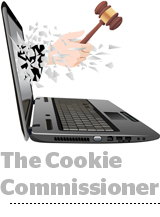 The Federal Trade Commission is in negotiations on a settlement deal with Facebook that would install a federally-approved privacy official at the highest ranks of the company and launch an independent privacy oversight committee. CEO Mark Zuckerberg would be responsible for enforcing privacy at the company, and Facebook will still have to pay a $3 billion to $5 billion fine, Politico reports. But it’s unclear what kind of authority these new positions will have over Facebook’s product and corporate decisions, or who would pay their salaries. And with no new changes proposed to Facebook’s data practices, privacy advocates think the deal doesn’t go far enough. “A board doesn’t create new privacy rights for internet users,” says Marc Rotenberg, executive director of the Electronic Privacy Information Center. “And to say that Mark Zuckerberg is personally responsible – Mark Zuckerberg is Facebook, so what does that mean? It doesn’t add anything.” More.

Ad Target On Your Back

The Irish Data Protection Commission (DPC) opened a formal probe into Quantcast, adding one more to the 17 other investigations for potential GDPR privacy violations, including Apple, Twitter, Facebook, Criteo and LinkedIn, TechCrunch reports. “The purpose of the inquiry is to establish whether the company’s processing and aggregating of personal data for the purposes of profiling and utilising the profiles generated for targeted advertising is in compliance with the relevant provisions of the GDPR,” according to a statement by the DPC. Quantcast is one of the important independent ad tech companies to watch in terms of GDPR compliance. The company has a popular site-tracking service, similar to Chartbeat, but it also packages audiences for ad targeting. Its preexisting publisher integrations also helped make it the most widespread IAB consent management platform, per Adzerk data. This means it will have to carefully parse the data that can be collected under legitimate interest. More.

Google launched an app policy center for AdMob and Ad Manager that lets publishers manage policy violations and appeals, and gives publishers more insight into the company’s enforcement process. The feature is “part of our effort to protect quality AdMob and Ad Manager publishers while building and maintaining a healthy and trustworthy advertising ecosystem,” according to a Google blog post. Through the policy center, publishers can view warnings, appeal certain violations within a 30-day window and track the status of its appeals. Previously, publishers had to search in multiple places for this information and were often frustrated if an unexpected violation shut down the app, leading to a cascade of problems as downloads halt and bad reviews stack up. The new mobile tool will “help reduce the risk of potential revenue loss resulting from honest mistakes.” Read it.

Verizon is looking to offload Tumblr in an effort to get its media revenue back on track, The Wall Street Journal reports. The sales process is happening right now, but it may very well result in a big nothing burger. In 2013, Yahoo, before it got folded into Verizon Media Group, Yahoo plunked down $1.1 billion for the microblogging site. But Tumblr never showed any meaningful revenue, resulting in a $230 million write-down in 2016. More.