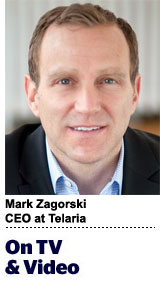 Today’s column is written by Mark Zagorski, CEO at Telaria.

The question of whether Netflix will introduce an ad-supported business should not be will-they-or-won’t-they, but rather when and how.

Those bullish on Netflix’s strategy of flooding screens with an unprecedented amount of original content conveniently leave out the fact that the company is burning through billions in cash each year and currently sits on $10.4 billion in debt.

It’s a staggering amount considering the number of profitable small-scale, advertising video-on-demand models that are flourishing around the globe. Faced with rapidly increasing competition from Disney, Hulu and Amazon, along with free video-on-demand (VOD) and live streaming services, Netflix will have to fight tooth and nail to hang onto its audiences.

The idea of ads coming to one of the last bastions of interruption-free TV might not sound like a welcome one, but Netflix can avoid the bloated ad loads of traditional linear TV and implement a better experience for its audiences.

The CTV and OTT advertising experience has leapfrogged linear TV, offering data-driven relevancy and personalization that makes advertising a more engaging experience for the viewer. This is what viewers have come to expect.

Netflix can incorporate an ad-based revenue stream without hurting its core subscription business. Netflix already has a tiered subscription model for viewing quality – it can add a free, ad-supported version and still maintain the subscription-supported, ad-free model. Others have successfully implemented these hybrid revenue models, proving that consumers appreciate more choice. In fact, consumer choice is one of the key benefits of streamed TV over cable.

On an international note, if you’ve browsed through Netflix’s content library recently you might have noticed an increase in non-English original content, from the award-winning “Roma” to Korean dramas. Netflix is betting big on global markets, working on more than 50 projects in Mexico alone. But a few international factors hinder its success in turning content into cash.

For one thing, while IPTV adoption has been swift in the United States, consumers in other parts of the world are still entrenched with legacy TV-watching habits. In France, for example, OTT platforms must wait 36 months past the theatrical release to stream content digitally.

In many countries, much like the US before connected TV and OTT became mainstream, there are one or two companies that dominate what people in that region watch. It may take years for Netflix to convert those viewers.

Finally, there is the challenge of affordability for global viewers. Netflix’s subscription prices may be too high for viewers in many emerging markets to justify, particularly if they aren’t interested in English-language content. Introducing advertising in global markets where Netflix’s ad-free model isn’t already the norm will result in little, if any, consumer backlash, while helping the service scale more quickly.

The truth is, when Netflix started to produce original content, it became a media company, and media companies have a basic need to monetize their content. To categorically shun an ad-supported model and double down on a multibillion-dollar content arms race is unsustainable. Research shows digital-first audiences and cord-nevers expect advertising as part of the viewer experience. They do not mind ads, tending to view advertising as content.

Netflix has an opportunity to expand its global footprint and further investments in content creation if it looks to the data around ad-supported connected television to help shape the future of its business.