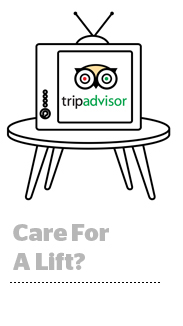 The CEO of TripAdvisor, Steve Kaufer, has a motto: “If it’s worth doing, it’s worth measuring.”

Which is why TV had to prove itself before earning a spot on the travel review site’s media plan. Until 2013, TripAdvisor spent most of its budget on digital, mainly because of its measurability.

In other words, it’s extremely easy to confuse correlation for causation when you’re trying to measure TV, and “correlation doesn’t cut it,” D’Auria said.

More than 455 million people visit TripAdvisor’s site on a monthly basis, which means a lot of its users likely hit the homepage without being prompted.

“If you start putting money into a certain network, you might see folks come to your site, but how do I know how many folks would have come anyway, even if the ad had not run?” said D’Auria.

The trickiest part was creating the control group. Rather than randomly splitting viewers into control and test buckets at the start – it would have been too expensive to buy airtime for placebo TV ads – TripAdvisor works backwards.

First, TripAdvisor runs one of its TV ads indiscriminately in a given market. Then, iSpot finds people who look identical in every way to the exposed audience other than the fact that they didn’t see the ad. Any difference in performance between the two groups could safely be attributed to television.

“It turns out that putting dollars where you already have an abundance of audience may not necessarily be the best investment,” he said. “Perhaps it’s better to be open to a new market or to expose new audiences to your message.”

TripAdvisor has pulled back on its online spending this year – CEO Kaufer called it “unprofitable spend” on the company’s Q4 2017 earnings call in February – while pumping more budget into TV ads. The company is comfortable doing that, because the measurement is there.

But an attribution model like the one TripAdvisor uses for its TV ad spend is only as good as the data that supports it, otherwise you get “garbage in, garbage out,” said Sean Muller, CEO and founder of iSpot.

“You hear a lot of people talking about attribution and very little about the quality of the data going into the models,” said Muller, who noted that iSpot feeds its models with a combination of smart TV data, the ad airing schedule, content viewing data and its own ad catalog layered in with demographic and device-level data.

“Most of the data sets on the market are extremely raw and extremely inaccurate – that’s probably the most overlooked thing in the ecosystem,” Muller said. “You’ve got to have multiple data sets.”