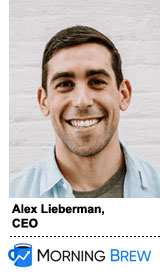 In college, Morning Brew CEO Alex Lieberman started sending a recap of the day’s business news to friends looking for finance jobs. Four years later, he’s built a profitable media company that generated $13 million in 2019 revenue, up from $3 million the year before.

The company runs lean. After starting the year with just 33 employees, it plans to increase headcount to 51 by the end of the quarter. It has never raised funding beyond a friends-and-family round. It invests profits to fuel growth.

“[Advertising] has been a great way to scale the business without outside funding,” Lieberman said.

Morning Brew sells ads and sponsorships for its daily newsletters and podcast. The audience is niche, but valuable, given its readership of young people in business. Its flagship newsletter has nearly 2 million subscribers. Two offshoots for retail and emerging tech have 105,000 and 165,000 subscribers, respectively.

AdExchanger: How long is advertising going to be 100% of your revenue – given that everyone’s all about revenue diversification these days?

ALEX LIEBERMAN: The plan isn’t to be a 100% advertising-focused business for that much longer.

Now that we have this great foundation, we’re taking a step back and thinking of other ways we can monetize the business. Not just because advertising people talk about it being a fickle revenue stream, but because we think that to be a healthy media business, you have to have multiple, diversified revenue streams.

In the worst case, where we have had a bull market for more than 10 years and things are probably going to soften up at some point in the relative near term, how have you diversified who’s paying you money, so that you aren’t as exposed to as much risk?

What kind of revenue diversification makes sense for Morning Brew?

We’re looking at a lot of things, including charging our consumers directly to own a relationship with them. Then there’s the B2B side. We are better at creating, scaling and monetizing email newsletters than anyone else. That’s what the entire business is built on. How can we take that competency and provide value to businesses that just don’t have all day to focus on that?

So is 2020 the year advertising becomes less than 100% of your revenue?

Advertising will still be the lion’s share of revenue. For us, the first way to diversify was within the advertising bucket. One is diversifying the type of client we work with to both upper-funnel and lower-funnel clients. When you’re working with partners with different marketing goals across industries, you’re better protected in an economic downturn.

And the second thing we are diversifying is the assets we are offering to brand partners for advertising. Our daily newsletter was 100% of our advertising dollars. Now we have Retail Brew, Emerging Tech Brew and the Business Casual podcast.

Yes. But I wouldn’t have wanted to work with anything else but more direct response partners early on. At the end of the day, direct response clients are only going to spend money with you if they’re seeing a return, and the acquisition cost of a new customer looks good relative to other channels. So the fact that we’ve had strong renewals from direct response shows me the power of our brand and our audience.

Now we’re starting to partner with brands and sell more holistic packages, such as takeovers and branded content and audio sponsorships. We’re looking to increase the number of brand awareness dollars we’re working with.

There was a VC-backed media bubble that’s deflated over the past few years. How much did you look at that recent history in your approach to Morning Brew?

[Co-founder] Austin [Rief] and I were both business and finance people by background and interest. It made us, for better or worse, look at things with a critical and cynical eye.

We’ve had the impression that the expectation of VCs or institutional capital doesn’t match the natural, healthy trajectory of a media business. And if it’s not matching expectations, it’s going to break.

One thing we’ve learned in conversations with really smart operators is that if you don’t need to raise funding, don’t. We can’t take for granted the control we have as founders. We’ve been fortunate that the economics of our business allowed us to be profitable early on, where now we just fund the business through the profits of the business.

How do you measure the loyalty of our audience?

You can only be so scientific with email because it’s so antiquated when it comes to metrics. You can’t look at time on site or scroll like you can on a website. Open rate is a good proxy.

We also monitor how many people email in. We get hundreds of emails every day from readers, and we respond to all of them. It’s not a science, but we’d be concerned if we had 2 million readers and no one emailing us at all.

Given the limitations of email measurement, what else can you do to measure loyalty?

As we become more data-driven, we are looking at doing cohort analysis. So not just what the open rate is, but the average lifetime of our reader. Then we can think about things we can do to extend the life of a reader, whether it’s from a content perspective or an automated drip perspective to keep them engaged.

What have you learned about the cost to acquire a new email subscriber?

We have internal metrics for what we deem a high-quality subscriber. So each month, when we evaluate our referral program or paid social, we’re looking not just at acquisition cost, but the cost to acquire someone with high-quality behavior.

We shift time and money based on what channels give us the most bang for our buck. We also have channels that are more scalable or less scalable, and we have to shift resources based on that as well. Some forms of cross-promotion or buys in other email newsletters are less scalable, and we have to look at the size of the audience in the channel. Facebook and Instagram are pretty much infinitely scalable.

What channels did you see the most early success in gaining subscribers?

In the early days, we didn’t have the ability to do paid acquisition. So most of the growth came from our referral program. We have 288,673 subscribers that have referred at least one person. So over 10% of subscribers have liked Morning Brew enough to take their referral link and have someone sign up – whether they’re intrinsically motivated by it, or because they want a Morning Brew sweatshirt, T-shirt or mug.

The referral program is also why we have an appetite for paid subscribers – because more than 10% of them end up referring someone else, so it’s like a waterfall.