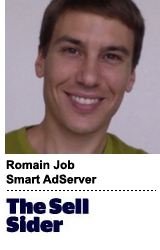 Today’s column is written by Romain Job, US general manager at Smart AdServer.

Every day brings new stories of ad fraud. In a market that is increasingly programmatic, it has become very easy and profitable to build machines to emulate human behavior, spoof premium website domains and cash in on improper advertising revenue.

Despite the efforts of stakeholders and great fraud-detection technology, the fraudsters thrive. They do so for an obvious reason: Our programmatic ad market was built by intermediaries that live off of data asymmetry. To build their revenue on pricing arbitrage, they need the value chain to remain opaque.

Cheaters spin that opacity into gold. Unscrupulous players can easily leverage data asymmetry to profit from fake domains, fake users and other fake data points, abusing media buyers in the process. Because so many programmatic-ad intermediaries care only for the volume of revenue generated, this strategy succeeds.

Eliminating data asymmetry between buyer and seller would in turn eliminate such fraud. One way to reach that goal is to use “impression tokens.” Publishers could generate a unique impression ID, directly on the page, sharing it during each programmatic transaction until the brand advertiser finally collects it.

By maintaining “books” of transactions, publisher and buyer could reconcile each transaction, ensuring that each is real. The token structure would enable anyone easily to identify the publisher with which the impression originated, as well as the time and date. Trade associations would certify the ability to generate these IDs in the publisher page prior to any ad request and maintain an auditable impression log. Technology could thus enable buyers to verify in real time the integrity of each impression offered to them.

Such a system would cost no more than a fraction of a penny per thousand impressions. From an infrastructure standpoint, I see no technical reason why generating such an ID would cost more than delivering an ad or counting a page impression, which is what these type of services cost. And it would save the millions of dollars that are wasted by advertisers and lost to publishers every day because of fraud.

An impression token would have numerous virtues. It would sustainably disrupt fraudulent ad schemes build on domain spoofing. By enabling the easy reconciliation of transactions it would also provide price transparency to both advertisers and publishers, allowing them to determine the true value of each impression, as well as the margins collected by intermediaries. It would spell the end of rogue arbitrage.

And by providing price transparency, impression tokens would allow regulators to get a better understanding of the revenue structure of each party involved in the transaction.

Such an initiative would require significant coordination between the stakeholders, of course, due to the sheer number of available daily impressions, which may reach 100 billion in the US alone. In certain countries, web audiences are audited by authorized analytics companies before being communicated to the market. These companies run dedicated server infrastructure to collect audience data from their tags. I would expect similar companies to dedicate themselves to the real-time certification of ad impressions.

It would be in the interest of both the publishers, whose brand and revenue are being hurt every day, and the marketers, who lose money to thieves every day.

A trusted marketplace would help everyone but the thieves. And why should we help them?