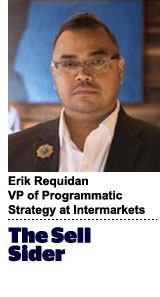 We keep hearing about consolidation, but if you look at the recent Lumascapes, it’s clear there are actually more ad tech companies than ever before.

International companies are increasing, looking for a slice of the American market. As international digital markets grow, so too will the pool of companies seeking to expand in the US, the largest digital market in the world. Landing deals in the US can change a company’s future.

That’s just one of the many reasons ad tech is experiencing a series of explosions today. Here’s what we’re seeing now – and what we expect to see in the months ahead.

Programmatic began with display banners, but formats and media rapidly expanded. Now we have video ads, mobile, in-app, audio and even programmatic TV. Programmatic is no longer a nascent or experimental channel – it’s solid enough that entire businesses are built around it.

And with the programmatic spend set to hit $46 billion this year, you can see why. If that doesn’t prove programmatic is here to stay, then AT&T’s acquisition of AppNexus probably should.

As a direct consequence of the header bidding explosion, I expect to see an uptick in private marketplaces. However, this may be less successful than the other explosions – maybe more of a “pop” than a “boom” since there are so many restrictions, starts and stops associated with PMPs.

Both buyers and publishers find them cumbersome and more work than they anticipated. And let’s face it, everyone really wants private “deals.”

There’s a huge amount of inventory available today. With a single demand-side platform, I’ve heard you can have more than 60,000 options for media placement. However, there isn’t enough demand to match all that supply. And the buyers that are placing media are struggling to find the quality their brands demand.

Since everybody wants to follow the money to the supply side of the industry, sites and publishers are being acquired by tech companies brokers and other third parties are clamoring to manage their media inventory. The industry press and analysts call it consolidation, but it looks a lot more like larger companies filling in the gaps within their own businesses and buying rather than building to do it. Hence (again), AT&T and AppNexus.

Related again to the explosion in bid requests, there are many questions that we need to answer with respect to the quality of the inventory that’s expanding so rapidly on the supply side.

Companies that will often say that this inventory is verifiable. Is it viewable? Is the content brand safe or inflammatory? Is it even real media?

A new proliferation of companies can answer these questions.

Publishers seem to increasingly offer creative brand advertising or native advertising these days – and charging an arm and a leg for it.

When done well, there is success. Ask Vox. Time will tell if these agencies or mini in-house agencies will survive; their overhead is astronomical, given the amount of built-in overhead they have in their full creative teams. Like the advertising agencies from the golden “Mad Men” days, these shops are pricey and expensive to run, and their sales cycles are long and competitive. Agencies need these outlets, and a few will lead the way like Giant Spoon.

At the end of the day, all these explosions are the signs of a healthy, growing industry. The ad tech market is in yet another transition, as the Lumascapes plainly show.

And if you had any doubt in your mind that the industry would continue growing, think back to 2010, when the Lumascape was only a single – albeit logo-packed – PowerPoint slide.