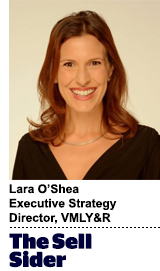 Those who lived in noughties Britain will remember the scenes in Little Britain where David Walliams played customer service advisor Carol Beers; she lived behind her computer screen, and her response to any reasonable request would be “Computer says no.”

Fast-forward a couple of decades, and we find ourselves in the era of data-driven decision-making and data-augmented creativity. No one disputes that intelligent use of data unlocks smarter insights and greater business results. In fact, McKinsey argues, “Companies that harness creativity and data in tandem have growth rates twice as high as companies that don’t.”

But all too often, marketers are falling into the trap of “data says no,” hiding behind data to make decisions, sometimes predetermined, without broad exploration. For instance, it’s easy to create an overreliance on data to justify a creative idea rather than using data for insightful strategy development. It’s a deadly temptation to rely blindly on data to make decisions without questioning data validity, source, motivation, collection methodology and in-built biases, or interrogating the analytical approach.

When we fail to look at the whole picture, we risk misinterpreting data. For example, when analyzing websites, we often attribute a long dwell time to engagement, believing someone is interested in spending time exploring what’s on the site. But what if this is actually a confused user trying to navigate a badly designed page?

This failure to consider the broader landscape can have larger, dangerous consequences; as companies increasingly lean into machine learning and AI, they should be reminded that the data that is inputted will shape the outputs – a lesson Amazon learned through strong criticism of its AI recruiting recommendation tool. The tool over-favored men for technical jobs because the historical datasets they used were biased toward men.

Mar tech and ad tech solutions are, likewise, sometimes programmed and left to their own devices without human guidance or interpretation. I distinctly remember returning from the hospital with a new baby, only to be served Facebook ads encouraging me to put my baby up for adoption. For the many new moms who suffer from postnatal depression – who might be adjusting to motherhood without a community around them – this could have exacerbated mental health issues and might have been devastating.

As marketers, it’s our job to orchestrate, curate, interpret and harness. Data cannot and should not replace critical thinking; it should augment thinking. It’s up to us to be curious, to harness and hone data to help us understand and interpret the world around us, and then to create and deploy creative as effectively and efficiently as possible. Harvard Business Review emphasizes this importance of curiosity, stating it “has been hailed as one of the most critical competencies for the modern workplace.”

In this whole-brained thinking approach, data is a key ingredient. But it could be argued that, as a society, we have come to rely too much on the left side of our brains to the detriment of seeing the big picture. This removal of our human judgment, this overreliance on tactical data and dashboards rather than leaving space for nuance, is the “data says no” trap.

When we become too reliant on data as the answer, and bypass interpretation as a result, we fall into the trap of ignoring what can’t be quantified, and we risk losing so many valuable and rich human insights. Instead, we need to be careful not to hide behind data as a way to make decisions without enough thinking and surround ourselves with more enhanced data literacy, where we can both interpret and challenge our assumptions and ideas.

Data and data-driven marketing are now essential parts of a brand’s success, but data alone is not enough. It is the insights discovered from the data, and their creative application to real human needs, that will help brands win in the long run.