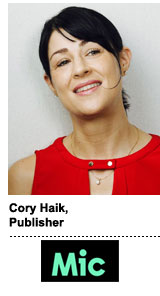 Some digital pubs, like Vox Media, build out a portfolio of completely separate brands, while others develop sub-brands, like BuzzFeed’s food-focused Tasty.

Mic looked to social media to come up with some of the publishing channels.

Slay and Strut developed after Mic observed its social media audiences engaging around the topics of feminism, style and body positivity. It spotted an opportunity to provide those audiences with content they cared about.

“We saw that if we targeted our journalism toward those audiences, they would engage pretty deeply,” said Mic publisher Cory Haik, who first served as chief strategy officer when she joined more than a year ago. “There are audiences that will come to Slay, our feminism channel, that may never interact with our coverage of gaming, tech or arts and culture.”

Haik wants these channels to stand on their own, but still have strong Mic branding. Slay, for instance, goes by “Slay by Mic” on Instagram and Facebook.

“We’d like the other channels to stand on their own, but be endorsed by the network,” Haik said.

For these social-focused channels, Mic switched up the way it’s communicating with readers.

“We are doing very specific types of visual storytelling and packaging that was born organically out of the fact that there were impassioned audiences out there,” Haik said. For instance, there’s lots of captioned video, which works better on social media.

Many of Mic’s new channels span platforms, including written content, video newsletters, podcasts and social content. And with more funding, Mic will expand further into video content for streaming platforms and over-the-top.

Mic, which aims to reach the 80 million US millennials, hasn’t yet cracked comScore’s top 50 like BuzzFeed, Vice and Vox.

But Haik sees room for Mic to gain additional scale with its channel strategy, especially as it moves to build audiences on different platforms, including over-the-top and streaming video, Apple News and, of course, Facebook.

“Scale is great. In the words of journalism, it equals impact,” Haik said. “There is still a lot of ground to gain in terms of platform growth specifically to the channels. But we are not just after scale. It’s important for us to no dilute our vision or our voice, but to make it stronger and clearer within each of those channels.”