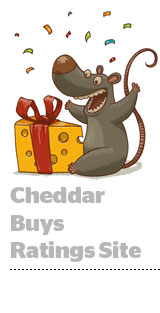 “We need to be in the direct-to-consumer business, where users are doing something other than consuming media. I wanted us to own a utility,” Steinberg said.

When Cheddar in May bought Viacom’s MTVU business, which it turned into CheddarU, it wanted Rate My Professors too, Steinberg said.

“We couldn’t convince them to sell it to us,” he said. Eventually Steinberg wore them down and bought the site.

He wouldn’t reveal the terms of the deal, but said the business will be profitable immediately after the transaction closes in mid-December. He expects revenue on Rate My Professors to double in 2019.

The current layout of Rate My Professors includes a heavy ad load (especially on desktop) including pop-ups and sticky ads. Cheddar will polish it, he said, reducing ad load using Taboola’s feed product, which inserts ads via Facebook-style cards. Cheddar will also offer a Glassdoor-like product for professors to access their ratings.

Over 90% of Cheddar’s revenue comes from advertising, with the remainder coming from subscriptions and content licensing agreements. Cheddar’s strategy is to become an essential part of skinny bundles, such as Sling TV, YouTube TV, Hulu and Comcast XI.

Users need to log in with their credentials, but Cheddar neither pays nor is paid to be part of those bundles. CheddarU offers a second distribution channel for its content, across hundreds of college campuses nationwide.

Adding a professor ratings review site may not seem like a logical way to expand Cheddar, but Steinberg said Cheddar’s initial move to go into live news was just as counterintuitive.

“We have to think differently,” he said.