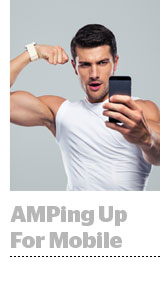 Google is less than two weeks away from releasing its Accelerated Mobile Pages (AMP) into the wild.

The AMP program will move out of its test phase and begin displaying the mobile-optimized content pages in its search results before the end of the month, and possibly as early as next week, according to AdExchanger sources. When that happens, Google will start prioritizing AMP pages over slower, non-AMP ones, though some partners still aren’t sure how that prioritization will occur.

In addition to displaying fast-loading content from publisher partners in a visual carousel, AMP will feature fast-loading ads. This was the trickiest part of AMP to get up and running.

AMP works by caching content, enabling a publisher’s pages to load faster. But ads must be called in real time, making it more difficult to speed them up.

But it can be done. OpenX and Index Exchange are among the outside tech partners bringing ads to AMP. Other project participants include sponsored content tracking platform Polar, content recommendation engines such as RevContent and publisher analytics tools like Chartbeat.

The program signed up three dozen beta publishers, including the Guardian, BuzzFeed, The Washington Post and The New York Times. These media companies began experimenting with AMP four months ago when Google announced the project, but those pages didn’t have ads.

For publishers not in the beta program, deciding when and if to join AMP will require some complex calculus.

If publishers value traffic from Google News, they should definitely prioritize AMP, said Jake Goldman, founder and president of web design agency 10up. That’s because AMP provides a powerful, visual user experience that will likely benefit publishers that participate.

AMP’s effects on monetization will be harder to calculate.

Faster-loading pages may lead to a rise in page views. But AMP doesn’t support more complex, higher-paying ads, like interstitials, which could dampen yield. Ad load will likely be lighter, too.

“In the short term, will [publishers] see more or less [revenue] the day Google switches it on? The answer is they will probably see less,” predicted Goldman. “But long term, we think this environment is the lesser evil.”

On the other hand, a lighter ad load could improve performance for advertisers.

“On publishers with a simpler user experience, whose pages aren’t convoluted with ads, we see a massive uplifts in RPMs,” or revenue per page, noted RevContent CEO John Lemp, whose company is participating in AMP.

Header bidding could work in an AMP environment, according to Index Exchange CEO Andrew Casale – it just takes some re-engineering. “This is an active development effort,” he said.

Programmatic platform OpenX will also support AMP. Header bidding is “one of the unknowns,” CRO Jason Fairchild said. It will require work on the part of OpenX and publishers, and “we don’t yet understand the full extent of that work.”

There’s also the question of what kinds of ads AMP can run. Because AMP doesn’t support as many kinds of advertising creative, both advertisers and publishers need to communicate about what will work in the new page format.

Google AMP may speed up page load times, but it also increases the technology burden on publishers who have been confronted with a spiraling list of “platform” distribution channels, most notably Facebook’s Instant Articles, Apple News and Snapchat.

But the relative openness of Google AMP – an open-source project, after all – has won it respect among those participating.

“We think even if it limits what you do today, we would take AMP over Facebook Instant Articles restrictions, Twitter ramming ads in your feed or Apple News,” Goldman said.

RevContent, for example, participates in AMP, but it’s not welcome in Facebook Instant Articles, which has more restrictive ad requirements.

Google, with its clout and reach, may succeed in wrangling the excesses of the open web, which has led to a rise in ad blocking and data plan-sapping bloated mobile ads.

“AMP is about the user experience on the open web,” said Polar CEO Kunal Gupta. “Google has a role in that, but so does Twitter and Pinterest and a lot of other publishers. It’s less about Google and more about giving the user a better experience, which publishers have not been able to do on their own.”

While Lemp expects better performance and speed from AMP, he’ll be keeping a close eye on how it works post-launch.

“We love data over here, and we are all going to be sitting here with the popcorn seeing how the [AMP] data comes out.”