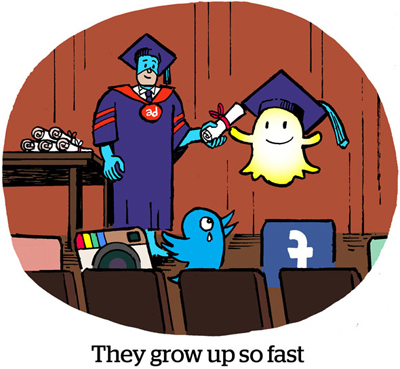 Snap is embracing direct response advertising with both arms.

It’s been launching performance-focused ad products for Snapchat at a regular clip over the past couple of years, and on Thursday it added a few key new features to its app ads toolkit.

Performance advertisers on Snapchat can now optimize for installs directly from Lenses, implement a bidding strategy based on specific minimum return on ad spend goals and more easily set up campaigns designed to drive in-app conversions.

Snapchat is also making progress with its Audience Network, which was first teased in April 2019. The network is now entering open beta within the Snapchat Ads Manager for app advertisers looking to reach US audiences. Advertisers can also access the audience network and monetize their inventory through mediation partners, including MoPub and AppLovin.

Direct response budgets, which make up more than half of Snap’s revenue, have doubled over the past two years.

DR spending has only increased during the pandemic, including among more traditional brands, in tandem with an increase in consumption and engagement – but that means that there’s also more competition to try and get someone’s attention, said Skye Featherstone, a product marketing manager at Snap.

“What we’re seeing in 2020 is an absolute tectonic shift into performance advertising as an imperative to drive results and a core driver of the bottom line,” Featherstone said. “And as belts tighten on budgets, we need to make sure that we’re delivering maximum efficiency, reach and ROI.”

That goal is why Snap has added the ability to optimize for installs directly from Lenses, its augmented reality filters. User acquisition advertisers now have the ability to select app installs as their campaign objective from AR Lens campaigns and to set a target cost per install.

The plan for the rest of the year and into 2020 is to bring goal-based bidding to additional formats, including Story Ads.

“App conversions and retargeting are probably the most underutilized and highly effective strategies for app marketers,” Featherstone said.

The app conversions flow allows app advertisers to combine a deep-linked ad format with the ability to create custom audiences based on in-app actions and set goal-based bidding options.

“There are millions of apps in the app stores and even after someone downloads something, the average user spends most of their time with a small number of apps – and 95% of users end up churning within 30 days of acquisition,” Featherstone said. “So, it’s about ensuring your app is the one that’s driving value for your users.”

But a successful app strategy isn’t just about paid media, which although crucial for acquisition and key for engaging lapsed users doesn’t speak to the app experience itself.

There needs to be a “virtuous relationship between ad experiences and non-ad experiences,” Featherstone said.

Two examples are Snapchat’s Login Kit, which lets Snapchatters sign in to an app using their Snapchat credentials, and Creative Kit, which allows developers to integrate their own stickers, filters and links directly into the Snapchat camera.

“A healthy ecosystem for app developers on Snapchat involves ensuring that developers have a strategy for both sides,” Featherstone said. “We want to help them bring the best of Snapchat to their app and then they can utilize our ad formats in concert to drive maximum effectiveness.”