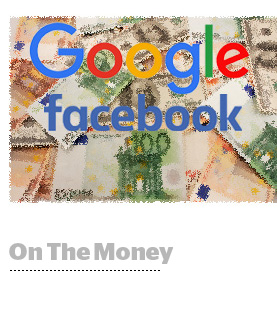 The global ad market is set to grow even faster than forecasted. Why? It’s the duopoly, folks.

Magna predicts overall digital ad spend will hit $250 billion this year – accounting for 45% of global ad revenue – with mobile on track to make up 62% of the total.

Anything that reaches scale has to plateau sometime, but digital still hasn’t reached that inflection point, Letang said.

Brand safety concerns and anxiety over data scandals aren’t having any discernible impact on digital growth either, although some big brands, particularly in CPG, entertainment, QSR and pharma, are putting some money back into the stability of television.

But big brands are less responsible for the duopoly’s gains than the millions of small and medium-sized local marketers spending on social and search, Letang said. It may be a few promoted posts here and there, but when multiplied by millions, the numbers add up.

On its last earnings call in April, Facebook touted the accessibility of its ad platform. Many of its 6 million advertisers are SMBs.

“In the past, they might have been doing things like the Yellow Pages or flyers or direct mail, and some of them were probably doing nothing at all, and now they’re using Facebook and Google,” Letang said. “These are tools that keep creating new marketing opportunities that simply didn’t exist before.”

But the picture is somewhat less rosy for traditional media.

Although TV is hanging on thanks to large brand stalwarts and cyclical spending on major events, such as the World Cup and US midterm elections, without those tent poles, growth for 2018 would likely be 5.5% – the same as last year. In other words: flat.

Flat growth must sound pretty good, though, to channels such as print and radio. Global print ad sales are set to decrease by 17% this year. Radio is on tap to drop by nearly 4%. Out-of-home is growing, but it’s only a bright-ish spot. The sector will scooch up 2% mainly due to the digitization of OOH.

But television and broadcast networks have a trump card to play. Addressable TV campaigns are projected to bring in $800 million this year, up 27%. That’s not to say there isn’t competition, though. The OTT upstarts, including YouTube, Hulu, Roku and others, are forecasted to generate more than $2 billion in ad impressions on TV screens in 2018 – up 40%.

“It’s the television set making a comeback with familiar TV content on a familiar screen,” Letang said. “The difference is it’s served digitally – in many cases programmatically – and it’s starting to be targeted.”

Speaking of programmatic, ad spend in the sector is still growing at a rapid clip in the US, where it represents 62% of total display ad spend ($12 billion), which Magna predicts will hit 78% by 2021.