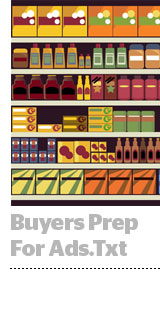 The public comment period for ads.txt, the initiative by IAB Tech Lab to cut down on domain-spoofed traffic, is now over. But are marketers, their agencies and DSPs ready to adopt?

To be fair, it’s still quite early. Publishers are actively creating ads.txt files and DSPs are scanning them. The IAB Tech Lab has not yet finalized the spec and promoted it for marketplace adoption. So buyers are biding their time on the sidelines.

No buyers that AdExchanger spoke to had immediate plans to implement campaigns using ads.txt.

“We will be paying attention to who starts to implement ads.txt,” said Melissa Bonnick, VP of programmatic strategy at Affiperf. “Because if we get up tomorrow, and 50% of top publishers have rolled this out, it’s really important that we [do too].”

Thus far, however, ads.txt has had low adoption from the publisher community, said Sarah Warner, the digital investment lead for programmatic and video at GroupM. That’s why it’s up to programmatic buyers to educate their clients and put a little pressure on them to adopt the tool, Warner said.

But there are a number of publishers leading the adoption charge – like Business Insider, for example, which put up its file up in early June.

A number of other publishers are holding regular meetings to talk through adoption, run tests with DSPs to make sure everything is working correctly and bring their sites into compliance.

But those technical hurdles are small compared to the challenges of widespread industry adoption.

“The technical implementation is simple from the publisher side and our side,” said Tim Sims, VP of inventory partnerships at The Trade Desk. “All we need to do is read the text file on the publisher page. On the cons side, everyone has to play for it to work.”

One way to encourage adoption would be to automatically opt buyers into ads.txt, but most DSPs aren’t going that route.

Rather than making ads.txt a default campaign setting, Google’s DoubleClick Bid Manager will require buyers to actively check a box if they want to run campaigns using the tool. MediaMath said the ads.txt signal will become part of its inventory quality and brand safety algorithms, while AppNexus said it expects ads.txt to be the “always-on” default standard over time. And The Trade Desk has not yet decided how Ads.txt will be integrated in its dashboard.

Although the ads.txt solution has been lauded for its simplicity, buyers note that there are some holes.

“Ads.txt does not cover the entire supply chain,” said Warner, who noted that it doesn’t work for mobile apps, anonymous inventory or syndicated content.

Buyers will also still need to pay attention to fraud and brand safety using other DSP tools. MediaMath, for example, sees ads.txt as something that runs in conjunction with its other ad quality initiatives.

“Ads.txt is one more tool in our arsenal,” said Lewis Rothkopf, MediaMath’s general manager of supply.

“We have been educating our clients on best practices for buying programmatically – consolidated list of exchanges, whitelisting, et cetera,” Warner said. “Ads.txt is just one of the industry initiatives to solve this problem, so education and conversations will be ongoing.”

The true test of ads.txt will come in Q3, when many expect publisher adoption to pick up enough for buyers to hop aboard.

“This is great for the entire ecosystem,” Sims said. “It brings advertisers and sellers closer together and creates transparency around the supply chain. We expect people would utilize it.”