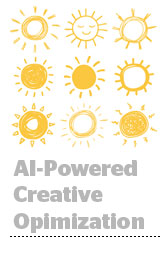 The right focal image, message and even background color can make one advertising creative shine above the rest.

To help marketers improve the performance of their creatives, Watson Advertising built Advertising Accelerator, a tech tool that predicts the best ads and quickly tests versions during a campaign.

The goal is to apply the same automation that drove the growth of programmatic to the creative side.

“If you can find the right consumer in the right place, can you truly give them the right message?” said Jeremy Hlavacek, head of revenue for Watson Advertising. “That’s what we think has been missing, and one of the reasons why consumers are frustrated.”

On a basic level, the tool resembles dynamic creative optimization (DCO). But Watson’s AI tech elevates it to the next level, Hlavacek said, calling Advertising Accelerator the “AI answer to DCO.”

“We think the current DCO market has been ignored for a long time. Many of these tools were built close to a decade ago,” he said. “They use preset rules, like an instruction booklet. Instead of programming a set of background colors, why not let Watson test them before campaign launch?”

Watson can use its understanding of ad performance to predict which combinations will perform best before launch, saving marketers time and money.

During a campaign, Watson can optimize according to a wide range of variables, not just those predefined by the advertiser.

For example, Watson Advertising tested the tool to drive installs for its Weather app in Q4. Watson’s machine learning paired each location with the creative that performed best. Though the Weather team intuitively knew that different regions care more about different types of weather, the machine learning homed in on which storm, drought, snow or sun message would resonate in each market.

“It outperformed everything we used to date,” Hlavacek said.

In the product’s early launch stage, Watson Advertising offers marketers a couple of options for accessing Advertising Accelerator. First, anyone buying media on Weather can use the tool to improve their messaging. Second, Watson Advertising will offer a managed service model, where it buys the ads on behalf of the marketer and applies its optimization tech during the campaign. Lending Tree and Potential Energy Coalition are two launch partners.

Eventually, once the product is more mature and further tested, Watson Advertising will consider offering a self-serve model.

The final showpiece of Advertising Accelerator is a dashboard that delivers insights about which creative messages resonated where – similar to Weather’s insights about where drought or sun messages prompted users to install its app.

Analyzing which types of creative work best stand to move a creative’s job from rote variations to a more strategic function, he predicted. “Instead of asking the creative to run a test on the Empire State Building vs. a short of the ocean, why not have the machine focus on the rote tasks and they focus on the bigger picture issues?”

The lack of such insights plagues the DCO market, he said, which is why Watson Advertising sees its tool as more comprehensive than simple creative testing.

“Another weakness in the DCO market is that they ‘set it and forget it,’ not taking into account what you can learn from these campaigns and apply to other media channels,” Hlavacek said.

“If a tagline resonates in a particular market,” he added, “I’m not sure how many marketers are mining those insights and applying them to their social media, TV and search campaigns.”