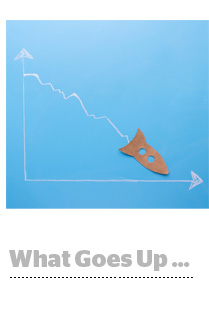 The Rocket Fuel brand is dead and buried, the founders long gone, its tech sold off to Sizmek for a song and the code completely rewritten. An ad tech unicorn that courted top brands, but ended up getting slammed on the public market.

During the best of times, Rocket Fuel was a high-performing black box, delivering algorithmic magic that produced results and drove impressive incremental value. Though beyond their exuberant claims, nobody quite knew how the company’s cutting-edge artificial intelligence was informing its media buys.

Multiple sources with direct knowledge tell AdExchanger that Rocket Fuel was regularly pooling its clients’ remarketing data, creating segments and selling the data to others without permission. For example, quietly tagging one car brand client’s website and using the resulting data in service of a competing auto client.

Although the AI was effective, the algorithm benefited from the commingling of data, and clients were largely unaware this was happening.

“Rocket Fuel’s mantra was, ‘Performance drives everything,’” said one former executive at the company. “Drive performance however you can and it doesn’t matter how you get there or whether you help agencies or clients understand it.”

And that was a big part of the problem: ego left unchecked.

“Rocket Fuel was not wrong to invest in the application of AI to advertising,” said Joanna O’Connell, a VP and principal analyst at Forrester. “But they were wrong to assume that people would be okay with hearing, ‘Just trust us – just trust the machines.’”

Rocket Fuel had a big vision when it was founded in 2008 by Yahoo advertising alums George John, Richard Frankel and Abhinav Gupta. The three wanted to build a “hybrid” ad network, which combined different data signals – social, behavioral, search, contextual – to nail down consumer intent and serve the best display ad in real time by examining every available impression rather than just a sample.

By 2009, Nike, Microsoft, American Express and Dell had all tested Rocket Fuel’s platform, and at the end of the first year, revenue was $2.3 million. By 2013, the year Rocket Fuel went public in a frothy market, revenue hit more than $240 million and the company’s valuation was nearing $1 billion.

Rocket Fuel grew to more than 600 people, raised nearly $84 million in funding and started opening offices like it was going out of style: New York, London, Hamburg, Paris, Toronto and a 145,000-square-foot HQ in Redwood City, California.

A large, aggressive performance sales team kept the new deals rolling in, for Rocket Fuel was a managed service provider that required a continual sales cycle in order to thrive. After its $10 million Series B in 2010, George John told AdExchanger that the company was “hiring salespeople like crazy.”

“They’d take us out for drinks, they’d have parties, they’d bring a lot of swag – it was fun, I have to say,” said a media exec, who was given Amazon gift cards worth enough to buy a portable bar table for the office, which is still there today. “They were one of the first companies in the space that realized they had to sell just like an ad network did, and it worked.”

With success, however, came arrogance. Before taking a job at Horizon Media, agency vet Adam Heimlich, who now works at GALE Partners, applied for a position at Rocket Fuel’s New York office during the summer of 2013. He arrived for a slate of interviews at 9 a.m. – and no one was there.

After half an hour of waiting, a single employee showed up visibly hung over. There had been a company party the night before and everyone stayed out late drinking, the employee explained.

“He basically just said I should leave, that no one was probably coming in that day, and he wasn’t even apologetic,” Heimlich recalls. “I was just thinking, ‘Are you guys for real – no one’s here, because you had a party last night?’”

Heimlich rescheduled his interview for another day and then … heard nothing until a much-belated rejection letter arrived two years later like a ghost from the past in July 2015.

The reasons for the company’s failure following its September 2013 IPO are well-documented: It lagged on mobile; it alienated agencies when it tried to go brand direct; it didn’t listen to marketers demanding transparency; its managed service model had no recurring revenue … and then, of course, there were the margins, as high as 60-70% in some cases.

Investors were dazzled by Rocket Fuel’s media margins – that’s why they bet so big on its IPO – but advertisers balked. Blinded by greed, or, more charitably, oblivious to reality, Rocket Fuel helped sow the seeds of its own demise. Fuel on the fire

It’s unclear at what point Rocket Fuel began combining data pools, but there was an even more pressing problem. Although Rocket Fuel had numerous blue-chip clients on its roster, the company’s cost of media was through the roof and advertisers were clamoring for a look inside the black box.

One of the primary reasons Rocket Fuel acquired data management and demand-side platform [x+1] in 2014 was to try and bake some self-serve capabilities into its tech.

But the merger wasn’t destined to produce the alchemy Rocket Fuel required.

After closing its very first day of trading at more than $56 a share, double the expected amount, the company’s stock began an up-and-down (mostly down) rollercoaster ride that lasted until it was eventually taken private by Sizmek in 2017.

Rocket Fuel had a lot of hope for its 2014 [x+1] acquisition, which it expected to inject SaaS DNA into what had been a managed services company.

But soon, unrest erupted between the merged companies because of Rocket Fuel’s less-than-kosher data-sharing practices. It became clear to some of the new people on the analytics team that blended remarketing data helped drive a lot of Rocket Fuel’s performance.

“The data Rocket Fuel was using … policy-wise, that was data we wouldn’t use,” one former [x+1] employee on the analytics side told AdExchanger. “This sort of thing, using data in indirect ways, does happen at other places, even today, but with more transparency to clients. Rocket Fuel didn’t want to go that extra mile of being upfront.”

Another former [x+1]-er called the situation “an ethical quagmire.”

“Rocket Fuel’s position was that, hey, all ad networks do this – but even if that was true, the problem is that you’re telling clients you’re a DSP,” the employee said. “And this is definitely not what DSPs do. It was the lie.”

It was frustrating to watch, the employee added: “The AI was really good – there was no reason to cheat.”

At one point, George John allegedly told an employee to deceive a client about how its data was being used. When the employee acted shocked, John supposedly said, “Oh, come on, it’s not lying. When you talk to your children about sex, you just give them the truth they can understand, and that’s how you have to talk to clients.”

It wasn’t long before Rocket Fuel’s board got wind of the internal unrest and called a meeting at which all three founders and chief counsel were present. The dirty laundry saw air.

Clients weren’t aware of the specifics behind the turmoil at Rocket Fuel, but the behind-the-scenes chaos was reflected in the company’s market performance.

“We see ourselves as a completely new company: new leadership team, new philosophy, new CTO, new values,” Sizmek CEO Mark Grether told AdExchanger. “I can’t talk about 2014. What I can tell you is that in 2018 at Sizmek, we don’t share data and our clients own their data.”

But how bad was Rocket Fuel’s non-transparent data sharing, really? (The devil’s advocate wants to know.)

As one media buyer put it to AdExchanger, “Yeah, it surprises me that this was happening, but does it anger me? Does bid caching anger me? More so, it just feels unfortunate. It should have been talked about. Something screwed up happens every day in this industry.”

“Something screwed up happens every day” – a fitting epitaph for early ad tech.

“Was Rocket Fuel involved in shady practices?” said one industry analyst. “To my mind, not more or less than anyone else in ad tech.”

George John declined to speak for this story.