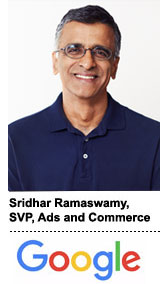 Consumers’ mistrust of data-driven advertising has reached a crisis point, and they must be reminded of the value they’re getting in exchange, said Google SVP of ads and commerce Sridhar Ramaswamy at the Data Summit in Dublin Wednesday evening.

“It’s up to all of us to confront the crisis in front of us,” Ramaswamy told attendees at the event, which is held by Ireland’s Government Data Forum. “Without user trust, without the sincere belief that there is a fair value exchange for everyone involved in this ecosystem, there is not a great future.”

It’s significant that Ramaswamy is giving this speech in Ireland, as Irish regulators are tasked with overseeing Google’s data privacy compliance in the EU.

Ramaswamy focused on all the benefits Google provides to users, as well as all the measures the company has in place to protect users and allow others to share in the data-fueled advertising ecosystem it created.

He reminded attendees of all that Google does for them – from making it easy to search for “Blarney Castle” to a small business’ ability to sell Irish-printed sweaters across the globe.

“The system has been incredibly positive for humanity as a whole,” Ramaswamy said.

Plus, Google is an economic booster, sharing its advertising revenue with publishers and contributing 6 million jobs to the European economy, according to the IAB.

Ramaswamy also outlined Google’s response to criticism about its practices.

He noted that Google supports journalism since publishers receive 70% of what Google makes on their sites. Since 95% of publishers opt into Google’s interest-based advertising, they share in the benefits of data collection based on users’ browsing history.

Google’s settings also let users see how it collects information and control what kind of ads they receive, Ramaswamy said. They can see why they were served a particular ad and they can mute ads. Google also improves ad quality through its support of the Coalition for Better Ads.

Google stays away from targeting based on race or sexual orientation, and doesn’t allow microtargeting of small user segments because “users find that disturbing,” Ramaswamy pointed out to attendees.

For GDPR, Google has done everything it could.

“Of course, we have tried our best to be compliant with GDPR,” he said. “We understand the intent of what European regulators and European consumers and citizens want to have, and have tried to be meticulous in how we followed this.”

As Google continues to work to build trust with users and regulators, Ramaswamy emphasized the value that Google provides and prompted attendees to imagine life without Google search.

“I know there are questions in today’s world about whether this is a fair exchange: questions on the part of users, advertisers, publishers, regulators,” he said. “I think it’s an important question, but it’s important for us to remember this is a rich and powerful ecosystem that didn’t exist 30 years ago.”