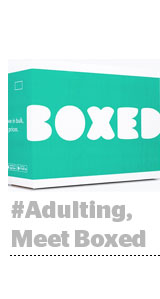 Sometimes it’s a good thing to put your customers in a box.

Boxed customers buy in bulk for very different reasons. Some are busy working parents, while others are urban millennials without a car.

Boxed’s new CMO, Jackson Jeyanayagam, wanted to be able to speak to potential customers based on what they cared about, whether that’s Boxed’s ability to predict when a customer needs to reorder or its access to bulk goods for 20-somethings looking for an online Costco replacement.

In his first few months at Boxed, Jeyanayagam hired Kantar Group to survey and identify potential customers. But Boxed made the research firm operate at startup speed, turning around a report in three months when such studies can take up to a year.

“Because we are an ecommerce startup, we pushed Kantar to make the [segmentation] actionable and something we could implement,” Jeyanayagam said. “That meant being able to tag the segments in the CRM, put it into the ad creative and track the segments as new customers came in.”

In October, armed with segments like, “#Adulting,” featuring young consumers transitioning into adulthood, and “The Joneses,” featuring highly social working couples, Boxed tested its first campaign across display, its mobile affiliate partners and Facebook – where it also scaled by using lookalikes.

Two millennial moms, one a 22-year-old in Iowa and one a 36-year-old in New York, will have more in common than their differing demographics suggest, he said.

Next year, Boxed will continue to put its segments to work and will move beyond test budgets. It is also passing the segment information into its CRM to better understand the customer journey. And it’s already sharing this unique information with its CPG partners, who commit marketing spend to Boxed.

Brands like P&G, Nestle and Mondelez often segment based on third-party research, Jeyanayagam said. In contrast, “ours is purchase data.”

They love overlaying data with us,” he said, “and it’s a good opportunity for us to provide them with actionable data they can use to prioritize their marketing with us and what products they bring into market with us.”