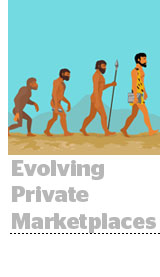 In recent years, buyers have flocked to private marketplaces to avoid the fraud, hidden fees and low-quality ads they saw in the open marketplace. Agencies created a network of auction-based private auctions to protect their clients from these threats.

Now the trend is reversing.

As the open marketplace’s performance and safety has improved, the value of these basic private marketplaces has diminished. Buyers cite third-party measurement providers, Ads.txt, FBI arrests of ad fraud masterminds and Google’s invalid traffic refunds as positive factors that have motivated them to move budgets back to the open marketplace.

“Private auctions set up purely to transact on inventory that’s available on the open marketplace are going the way of the dinosaur,” said Felix Zeng, head of programmatic at Watson Advertising.

Instead of private auctions, which use the same second-price auction logic and non-guaranteed inventory approach as the open marketplace, buyers want to lock down inventory and pricing. Other private marketplace deal types, like preferred deals or programmatic guaranteed, allow them to secure inventory and a fixed price while executing the deal programmatically.

“We are switching to programmatic guarantees and preferred deals. If not, we’ll stick to the open exchange,” said Niko Conner, director of accounts at S4-owned MightyHive.

Both holding companies and smaller agencies are part of this trend away from vanilla private auctions. In addition to mid-sized players like MightyHive, Publicis-owned Zenith and IPG-owned Magna Global are changing their private auction strategies. Publishers like DotDash and tech platforms like Google see more interest in preferred deals and programmatic guaranteed than in private auctions.

But not everyone is playing favorites with deal types – yet. WPP-owned Mindshare runs whatever deal type makes sense for its clients, using data as its guide. On the publisher side, Watson Advertising sees plenty of demand for private auctions, but for a different reason. It includes its first-party weather data in its deals, providing value beyond a fraud-free environment.

In the year ahead, the calculus of where to allocate budgets will likely include more guaranteed and fixed-price programmatic deals, along with a flow of spend back into the open marketplace.

Back into the open

Because of the programmatic cleanup, smart buyers that left the open exchange are returning.

“It’s considerably cheaper, and it’s driving performance now in a way it wasn’t a few years ago,” said MightyHive’s Conner.

When a deal reverts back to the open exchange, it’s often because buyers are confident they can get the same quality inventory for a much lower price.

Most significantly, Ads.txt reduces the possibility that the advertiser placed an ad on a different domain than they bid on – a game-changer cited universally among buyers. But the open marketplace has also lost value because it was an easy place to charge extra fees. Buyers are doing supply path optimization (SPO) to find low-fee paths to supply, which has successfully pressured many ad tech companies to lower fees and make them more transparent.

“We curate the open exchange by working with SSPs to provide the most direct and transparent path to the publisher,” said Aleksandra Injac, Mindshare’s managing director and programmatic practice lead.

Buyers also like seeing refunds every month from Google, which adjusts for fraud found after the fact (something it’s done for a long time on the search side of its business). “Putting that money right back in the pocket of advertisers was a really big positive change,” Conner said.

Combined, these changes make the open marketplace a much safer place to buy.

“Customers say they are more comfortable in open auctions than they were before,” said Dan Taylor, Google’s managing director of global display ads.

Besides providing a clean environment, many private auctions gave buyers slightly better priority, but PMPs are now a victim of their own success. With too many buyers competing for the same slot with “better” priority, they’re paying more but winning less.

“Private auctions aren’t really that private anymore,” Conner said. “There isn’t a guarantee of delivery against it like there is with a preferred deal.”

Private auctions also require more manual work than the open marketplace, so the benefits must justify the effort.

“PMPs [private marketplaces] are still not flawless,” said Colin Kurth, SVP of Precision, Zenith Media’s programmatic center of excellence. “There is much work that needs to be done to streamline the activation process. PMP set-up is still very manual, and many times we have to do a lot of work for private auction deals that take hours to troubleshoot.”

So buyers aren’t requesting private auctions when they can get the same thing via the open marketplace: “Always-on or foundational deals are not as prevalent,” said Sara Badler, head of programmatic and strategy at Dotdash.

Although simple private marketplace setups are falling out of favor, more complex deals are thriving .

“We always try to set up private deals where there is another layer of value for clients, whether it’s inventory access, pricing advantages, custom ad formats or data,” Mindshare’s Injac said. “Or it could be as simple as contextual relevancy.”

On the publisher side, Watson Advertising curates deals for weather moments such as pollen count, sun or rain. Buyers must use private marketplaces to access that first-party data.

Besides data, buyers might negotiate for unique or high-performing ad units, such as video ads with high completion rates. Although costlier, these deals can yield more conversions or actions.

“As we prove out better ROI and conversion rates, clients are becoming more comfortable with the higher cost but higher quality of programmatic inventory negotiated through deals,” said Kurth of Zenith.

“We’re negotiating preferred rates with the clout of Publicis Media, but also looking at the quality of the placement, including health metrics around viewability and fraud,” Kurth said.

Better rates help agencies prove their value at a time when many are worried about the threat of in-housing.

Even non-holding companies like MightyHive see the value of guaranteed programmatic deals. Via programmatic, marketers can manage frequency across both branding and performance campaigns in one place, which improves reach, MightyHive’s Conner said.

The growth in these higher-value deals isn’t necessarily coming from a “leveling up” of always-on deals, but because new advertising dollars are flowing into programmatic.

“Most of the investment in reservations in programmatic is coming from budgets we didn’t see before – traditional IO-based buys,” Google’s Taylor said.

For a big launch, buyers need assurances that their campaigns will spend their client’s budget, which incentivizes them to create a guaranteed deal. Even without the time pressure of a launch, guaranteed programmatic deals ensure that agencies spend all their clients’ budgets and keep rates in check even when demand spikes and drives up prices.

“Guaranteed PMPs will make a comeback since companies like Xandr and CBS will sell their linear scatter at a high CPM if it is guaranteed,” Kintner said.

The upscaling of programmatic deals benefits both buyers and sellers, said Adam Soroca, head of the global buyer team at Rubicon Project.

“The re-imagination of PMPs is going to help buyers improve their outcomes and publishers improve the monetization of their properties, because they can justify higher prices for their inventory,” he said.

Buyers and sellers who want to create real value with each other should think beyond a basic connection. Buyers and sellers noted that many DSPs and SSPs have already set up foundational deals for buyers to pick and choose from.

If a publisher’s inventory performs well when bought this way, a direct connection needs to add something even more, whether it’s an attractive price, data or high-performing ad unit. If not, buyers will move their dollars back to the open marketplace.